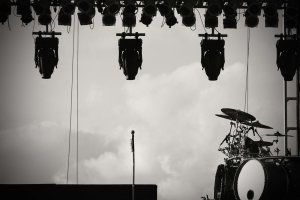 There’s a severe divide in the music debate. We can’t decide if music is morally neutral. Most disagreement points back to this question. Depending on how we answer the question, music could be a free-for-all, where personal preference dictates all we do, or our musical choices could actually be a matter of right and wrong. There’s a big difference between these two positions! Now these two positions might sound like two unbalanced extremes. Maybe they are, but many people land at least roughly in one of these groups.

We’re not all taking the same things into account. That’s the problem. Fundamentally, we don’t agree on what music is supposed to accomplish in the first place. This causes us to talk past each other, since our paradigms are so different. I’d like to dissect these two approaches.

On the one hand, there are what I’ll call the “musical moralists.” These argue that music is morally absolute: it’s either good or evil. While there are a variety of applications, almost all agree that rock music is a corrupting influence, not only for questionable lyrics but for its musical nature. The heavily syncopated beat, in particular, is roundly criticized for its sensuality, a nature that still applies when used with Christian words. Many go a step further, believing all music is inherently worship. In this way, using the wrong kind of music could cause us to inadvertently worship the wrong thing. Some also shy away from musical instruments or outright forbid them, seeing them as extra elements that distract from true worship.

On the other hand, there are the “musical relativists,” or those who argue that music is amoral. They don’t think that musical styles have an inherent bent towards either good or evil. Any style can be used to promote good values; it’s the lyrics alone that are of moral significance. In response to the critique of a certain style, they might say, “Hold on, I know some fine Christians who use that kind of music, and they’re clearly worshiping God.” Besides, they say, there are multiple forms of music-making that hardly seem a matter of good or evil, like singing “Happy Birthday” or picking a folk tune on the guitar around the campfire. While God could ask individuals to stay away from certain music, there is no standard that can be safely applied to larger groups. Cultural background and association will make some kinds of music better for different people. At the end of the day, it’s a personal matter.

I’m guessing both of these camps sound quite familiar. They’re very different approaches. Most likely your sympathy leans towards one of the two. So I’d like to look closely and see where the discrepancy is happening.

On a certain level, I think we can all agree that true worship comes from the heart. Worship isn’t limited to music—the word “worship” is often used to describe bowing down, particularly in the Old Testament. But when we use music to worship, we recognize that an untrained person can cheerfully praise the Lord, regardless of the quality of the sound. Singing and making melody in our hearts to the Lord is a practical action for the Spirit-filled believer.¹ This isn’t an experience limited to those who are musically proficient.

While music can be used to worship God, I see no reason why that would be its only purpose. But there also seems to be some equivocation on the word “worship.” Perhaps those that refer to all music as worship—a moralist tendency—are simply broadening the scope of the word, thinking of Paul’s encouragement to do all things as unto the Lord.² While affirming this desire, I think this stretches the usage of the word beyond reason. Clearly an unsaved person singing a beautiful hymn isn’t engaging in an act of worship. But it would be just as absurd to suggest that this unsaved person is now worshiping the devil by singing a hymn—he’s simply falling short of true worship, but not for musical reasons. We can only conclude, then, that musical excellence and worship aren’t the same thing.

Music of higher quality could be played, sung, or listened to by people with hearts that aren’t right. Likewise, music of lower quality could be played, sung, or listened to by someone who truly has a heart to worship. If music and worship aren’t inextricably linked, ungodly people could use their artistic abilities to create beautiful, wholesome music. It’s also true that performers could produce music that’s unhealthy for us—even the relativists agree if we’re taking lyrics into account. This is an important distinction since it enables us to look at style in-depth without passing judgment on the state of someone’s heart. Each one of us, as fallen creatures, have habits that should change. This doesn’t mean we aren’t being sanctified, nor does it mean that our actions are somehow justified. We’ll need to separate the two if we’re going to get anywhere.

The relativists rightly argue that it’s simplistic to view music as a clear-cut choice between good and evil. It’s the relativists who’ll be the first to nod their heads when I say that a pure heart of worship can exist outside of musical excellence. But is it logical to conclude from this that musical style has no spiritual significance? I don’t think so. When the relativists argue that music is morally neutral, they’re often arguing that our stylistic choices don’t really matter—certainly not in a way that has moral consequence. But music powerfully affects our emotions, and some music affects us in radically different ways than others.

How are we going to analyze, then? I think we’re back to looking at style. I agree with the moralists that this is something that matters, even if I disagree with much of the structure of their arguments. There are many choices in life that aren’t a matter of clear-cut good and evil. Yet it doesn’t follow that our choices don’t matter. For example, think about literature and entertainment. We can’t always draw a clear line between good and evil, yet it would be foolish to say our choices are of no moral consequence. Can’t we look at music the same way?

The problem with music is that it’s hard to make these value assessments. But let me first lay the groundwork for why I think this is irrefutably something that matters. Music is tricky because it’s primarily an emotional language, expressing things hard to put into words. We have strong, very personal reactions to it. There isn’t anything else like it. But it works. It’s elusive and hard to pinpoint just what exactly it communicates, but it communicates powerfully. That’s why we enjoy it so much and have such a strong connection with it. Multiple composers and musicians have echoed the idea that music begins where words end. There’s something to that, I think.

My method of analysis is fairly simple. I want to look at the music itself and see how it affects the listener mentally and emotionally. “Wait a minute,” you might be thinking. “I can do that for myself, and besides, we’re all going to be affected in different ways by the same music.” Well, that’s true to a point, but different people generally have similar reactions to the same music. We also grow accustomed to what we feed ourselves—you’re not consciously analyzing most of the time you listen. I do want you to analyze for yourself, only give a few pointers that I’ve found helpful.

So in short, I find myself between the moralists and the relativists. Musical style matters, not only aesthetically; we should care to understand how it affects us. To summarize my main point: music may not be inherently moral, but it communicates powerfully, and we shouldn’t be indifferent about this. Perhaps music changes us by influencing our emotions in a way that we can track. But to understand how it works, we’ll need to look in-depth at the music itself to understand the emotional and mental reactions it produces.

That will be the topic of my next post.

2 thoughts on “The Great Divide: Is Music Morally Neutral?”