The Smell of Smoke: Fear, Anxiety, and the Truth of God’s Character 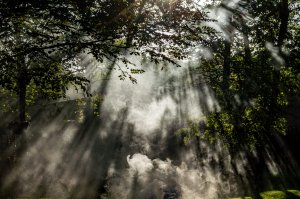 There it was again. A whiff of smoke – someone cooking maybe? A BBQ from outside?  I stood up from my desk. Where was it coming from?  I paused, sniffing the air. Oh, well. It probably wasn’t a big deal.

But I couldn’t stay focused.

What if it was something serious? I had to figure out what it was. Pushing back my chair again, I walked out into the hallway of our apartment. Opening the door, I stuck my head out in the stairway. It wasn’t coming from there. None of the bedrooms had any candles burning. Going back to my bedroom, I finally realized it was coming from outside. At least it wasn’t in our building. My racing heart began to slow and the tightening in my stomach eased as I tried to refocus on my work.

A year or so ago, I realized that I panicked about certain things. Smoke and unexplained smells were a couple of them. I didn’t want to think about our house burning down or the possibility of losing my family. So I tried to control everything. Every time I smelled something out of the ordinary, I could not stay still. I had to see if it was something out in the kitchen, a neighbor cooking, or a recently snuffed-out candle. When I could not pinpoint the source of the smell, my heart would race faster, and the knot in my stomach would twist a little tighter.

Unexplained aches and pains in my body also brought fear. If my side would hurt for no apparent reason, my imagination would run wild with possibilities. It was worse when I felt it in my chest. Was it my heart? A blood clot in my lungs? Yes, I knew I was young and healthy, but tragedies can happen regardless of age, I argued with myself.

Over time, I allowed the fear to build up and take control of my mind, pushing aside all logic and truth.

It continued throughout the summer. Eventually, I became tired of carrying the constant fear and began to open up about my struggle to my mom and to my friends.

That honesty began the journey to freedom.

I knew I had to combat the lies with truth. I tried. When I felt that unknown pain in my side, I tried to remind myself that I was in the prime of health and that it couldn’t possibly be something serious. Yet my mind, in an attempt to be “logical,” argued I had no proof I wasn’t actually sick. I could not answer that question. I was not naïve enough to think that I could simply say I was not sick and thus explain away all signs of illness.

The fear finally erupted one weekend. Home alone for a few days, the loneliness and anxiety kept creeping into my thoughts. The second night, I called a good friend to come over. Before she came, I paced around the house, trying to calm myself. I read different psalms, listened to a favorite choir song, and prayed desperately. Yet still the fear grew, and the pain in my side refused to subside. When my friend arrived, my hands were clenched so tightly they refused to open. At that point, I didn’t know if I was having a heart attack or a blood clot or any other major health issue. I never considered the possibility that this was only my mind controlling my body.

It was a full-blown panic attack, caused only by the fear I had allowed to rule my mind. There was no blockage in my arteries, nothing wrong with my lungs, nothing wrong physically at all. A later check-up with a doctor confirmed this. But in that moment, my mind feared the realm of possibility and created those physical symptoms in my body.

My family came home later that night. It helped knowing I had my sisters in the bunk right below me and my mom in the room right next to mine. I was not by myself anymore, so I no longer had to worry about being alone and sick. But loneliness was not the main issue. It was not even the fear and anxiety.

My main malady was an unbelief in the Word of God.

After that panic attack, I slowly began to realize that I was choosing to believe Satan’s lies over the truth, thus giving in to the fear. Subconsciously, I did not truly believe that God was good. And, I reasoned, even if He was a good God, He does not have everything fully under His control. I would have been shocked to admit this out loud. Yet my actions and my thoughts showed this underlying unbelief.

I had to change my mindset and believe that the Word of God was the unfailing truth. I failed to believe that God always kept His promises. And as I continued on my journey toward freedom, I began to see more and more how these lies about God had permeated my daily living.

I began to saturate my world with truth. It was not an instant epiphany where I never dealt with fear going forward. For months after I started hammering the truth into my mind, the smell of smoke would still make my mind race and my stomach tighten with worry. But, slowly, the truth of God’s Word did begin to break down the lies. Because only truth has the power to overcome the bondage of Satan’s deception.

I was also intentional about looking into the possibility of actual physical ailments. I went to the doctor for a basic check-up and told her about those chest pains. The results from the test results, which all came back clear, also helped to put my racing mind at rest. After that, when I still felt pain, I could assure myself that I was healthy and fine and that it was nothing serious. Over time, my mind began to quiet, and, as a result, the pains in my body began to go away.

This is my personal story. Many times, a doctor’s visit will bring dreaded news about one’s health. News we never thought we would hear, like my grandpa’s lung cancer. During those times, Satan will bombard us with lies about God. Lies that say this is completely out of God’s control, that this can never be used for good, that God has abandoned us. One of the hardest choices to make is believing in the unchanging character of God even when tragedy screams otherwise.

During my daily quiet times, I started sitting at my desk, choosing to write down the truths of God’s character instead of panicking over certain smells. It was those truths about the sovereign, good, faithful God that enabled me to overcome that crippling fear. For months, I had a list of God’s characteristics and their definitions posted next to my desk. Daily I saw those truths declared before me. I also wrote another list of truths that I often forgot. Ones such as, “I do not need to worry”; “The Holy Spirit will lead me”; “Satan cannot defeat me because I am in Christ”; and “The truth will set me free.” I did not always feel their truth even when I read them out loud, but their power eventually broke through the chains of fear.

Today, I have been set free from the crippling effect of anxiety and fear. No longer does a pain in my chest set my mind racing with the possibilities of heart troubles. The smell of smoke, while not necessarily comforting, does not bring irrational fear as it did earlier. As a human, I still fear the future. I still fear losing my family. But I have learned where to turn in the midst of that fear.

If you are struggling with fear, remember the power that truth has to set us free. I never realized the significance of John 8:32 until I had personally experienced it. Jesus did not come so we could live in bondage to Satan and his lies. May we cling to the truth of the Almighty God we serve – He truly is faithful, immutable, sovereign, and good.