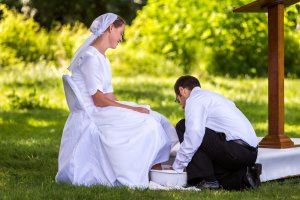 Immediately after Adam and Eve ate the forbidden fruit, God rather cryptically foretold that from then on, the relationship between man and woman would be fraught with attempts to dominate and subvert each other (Gen 3:16). Well, sure enough.

Mainstream society today is trying very hard to push back against men’s harmful domination of women, but in the process it is seeking to subvert and obliterate any unique leadership role men might have.

Our conservative church culture has tried to be faithful to Scripture’s teaching on the distinct roles of men and women. This is commendable and necessary. Our weakness, however, is that we often tend to view each other first and foremost as “men” vs. “women” instead of as fellow humans first, men and women second. This can lead to a subtle, subconscious devaluation of women and overemphasis on male authority.

In order to get our distinct roles right, we must situate them within the Bible’s story of humanity’s creation and redemption.

We need to start at the beginning. At the dawn of creation, God declares his intention to create a very special creature: humans (Gen 1:26–28). Their role is to rule over the newly created world, to represent God to creation and to love and submit to God as their High King. We read that there are two types of humans—males and females—but it is clear in the text that both have exactly the same calling. They are both God’s “image” on the earth; they are fellow rulers under God over creation. It is not “men” who are creation’s rulers; it is “humans.”

We see this truth in the NT as well, with reference to the new creation. Peter instructs husbands to care for and honor their wives, because they are “fellow heirs of the grace of life” (1 Pet 3:7). The calling of redeemed humans is just like the calling of the first humans: “humans”—men and women alike—are inheritors of the new earth, through Jesus the Messiah (see Rom 8:14–25).

It must never be forgotten that everything else the Bible says about men and women is built upon this bedrock truth.

Genesis 1 and 2 are placed in poetic juxtaposition. Chapter 2 gives a close-up perspective on how Genesis 1:26–28 unfolded in real time. What we read is something like the beginning of a beautifully choreographed dance. The male human is created first, from the dust. Then the female human is created out of the man’s side. This is a sign that she is the same as he is (Gen 2:23), but it also hints that the two may play slightly different roles. They are indeed to be fellow rulers, but Adam is a king and Eve is his queen. There is a special responsibility and accountability that rests upon the king’s shoulders to ensure that their realm is protected and cared for—and to make sure his queen is protected and cared for.

Eve (and by implication all wives) is often referred to as a “help-meet”—a phrase which has taken on a life and meaning of its own since its original use in seventeenth-century English. It can become dangerously easy to think of women as fundamentally existing as “men’s servants.” But in Genesis 3, when God soliloquizes that the man needs “a helper corresponding to him,” he is not thinking of a maid to do Adam’s work for him. The woman is created not to be Adam’s personal servant, but as his equal who would be able to help him in the calling to rule the world. They are indeed “corresponding” to each other—they are both equally made in God’s image. But King Adam needed a queen by his side to help him rule.

There is a sense of authority and submission right in Genesis 2 between Adam and Eve; Adam was created first with special responsibility, and Eve was created as Adam’s companion to share his mission. God had given Adam directions about which tree to avoid, and Adam had named the animals. But there is no sense of either Adam’s domineering Eve nor of Eve’s “subjugation” by Adam. They were king and queen.

In creation, we see two fundamental truths. First, all humans—men and women alike—are made as God’s representatives under him to rule the world. Second, males and females play distinct roles as “kings” and “queens” respectively. Adam (and subsequent males) had a special responsibility on his shoulders to ensure that humanity’s calling to care for, protect, and rule the world according to God’s direction would be fulfilled; and he also had a unique responsibility to ensure that Eve (and subsequent females) are well-protected and cared for. Eve (and subsequent females) shared in the common human calling, but Adam needed a queen to come alongside him and help him fulfill God’s calling for them both.

3. Grooms and Brides, Servants and Served

The royal dance completely unraveled in Genesis 3. In fact (as Paul much later would observe, see 1 Tim 2:13–14), the fall took place at least in part because the king and queen got their steps wrong. Since then, beautiful kingly and queenly roles have gotten skewed. Kings became tyrants and thought of their queens as slaves, and queens tried to become kings or tyrants themselves and to push their kings aside.

Jesus the Messiah has come to redeem fallen humanity. He came, though, as a groom to rescue a bride. The true King has come for a queen, the New Adam for a New Eve. And as we read in Ephesians 5, he laid down his life for her.

In so doing, Jesus brought a new clarity, beauty, and dignity to the relationships between husbands and wives (and by implication, between men and women). Wives are to work alongside their husbands and submit to them, even when it is difficult, both because that’s how creation is set up and now because it reflects how the New Eve is to relate to the New Adam. Submitting under difficult circumstances pictures how we as Jesus’ people must submit to him even in the painful things he sometimes calls us to. But it is husbands who have the more daunting responsibility. For Jesus has shown that what it means to be a king is to protect and care for your queen no matter what it costs, no matter how unworthy she is, no matter if it kills you. It is the man’s responsibility to help his wife to flourish and to become the most beautiful person she can be. He is to do this both because that’s how creation is set up (that’s what a good king does for his queen), but now even more because this reflects how the Messiah has laid down his life to get and beautify the most unworthy of brides. (See Eph 5:22–33.)

This is the framework in which we must think about the more commonly discussed issues of male leadership in church and home, of wives submitting to their husbands, and of women’s roles in the church. There are real differences in our roles, which various NT texts make clear. But it is only as we live inside the Bible’s story that we will get these differences right. We must remember that we are all first and foremost human, and “fellow heirs” of the new creation. And then we must learn how to be kings and queens, taking our cues not only from our first parents but from the New Adam and the New Eve he has come for.