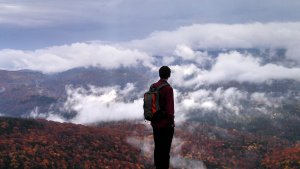 I started out the year a bit foggy-brained. It wasn’t because anything was going seriously wrong in my life. Just a few months before, I had quit my office job to become a music teacher. That was a big deal. I had dreamed about doing something like that for years. But I was stressed out. Was I capable of adjusting to a new environment and pulling off my teaching experiment successfully? I wasn’t sure.

I was still a bit shook up. Just a couple years before, I had suffered a crushing setback to my personal dreams. It started with a failed relationship that helped me realize just how stuck-up and proud I was. I had been riding a wave of confidence, only to be rudely awakened. I tried to view myself and my limitations more realistically and my boyish zest for life died in the process. While God was using these experiences to humble me, I still wanted to find purpose in using my talents. How could I thrive as an individual without becoming improperly self-assured? I wasn’t sure. I knew I couldn’t afford to take any shortcuts.

It was rough. But a few months into the year, my life started to turn around. God had used long months of deep searching to refine me. Coupled with a greater hunger for God, there were some practical decisions to incorporate more discipline in my life that started to pay off. Instead of being plagued by self-doubt, I was excited about all the opportunities I could pursue. I felt more confident as a teacher and started brainstorming about ways I could push my game to the next level. I also started working extensively on starting this blog, fulfilling a dream that went back years.

As I found fresh vision and hope for the future, it became easier to relate to others. I felt a natural joy and was less irritable. Not surprisingly, I soon sensed more appreciation from others as well. I was more likely to notice the good things in others and it seemed they returned the favor to me. (That’s truly how life should work, isn’t it?)

That was several months ago now. I remember how thrilling that initial turnaround was. Especially when contrasted with some dark winter months, it seemed almost too good to be true. I felt confident I had found some lasting keys to victory in my spiritual life. But in the past month or so, I started noticing things that alarmed me. Cranky moods started coming back. I became easily frustrated with others. Instead of being excited about sharing what I was learning, I found myself self-defensive, quick to argue with those that disagreed with me. I spent less time noticing the needs around me; my energy was spent trying to secure my own success. As my discipline began to lapse, I faced failure in areas I thought I had conquered.

I’ve been asking myself a lot of questions, many of which have emerged since I started working on this article. Why did my life seem to lose the momentum I felt just a few months earlier? Had I been overly optimistic before? Why would I start to stray from a place of victory in Christ that made me happier than ever before?

I think part of the answer lies in the reality that success makes us quite vulnerable. We tend to think of it the other way, of course. If life is going well, particularly spiritually, why would we be worried about slipping backwards? After all, haven’t we discovered the secrets of the Christian life?

But that’s not how life works—at all. It didn’t work that way for many godly men in the Bible, either. While we’re aware that many of our Biblical heroes had obvious faults, it’s interesting to note how many of them succumbed to their worst failures right after a pinnacle of victory. Success is hardly a safeguard for the future.

Consider David, for example. Here was a man who was destined for greatness from the beginning, yet endured affliction that seemed to continually postpone the promised kingdom. In this early period of his life, we read of few shortcomings. He was a pure, vigilant man. It didn’t deter him when the realization of his dreams often seemed far away. But after he was finally promoted to the throne, his life seemed to be riddled with mistakes. A moment of laziness and an evening stroll led to adultery and murder. Misplaced national pride led him to count his people, contrary to God’s will, leading to the death of thousands of innocent people.

His son Solomon fared even worse. Imparted with an unparalleled gift of wisdom, he ruled a nation at the height of its splendor, eliciting awe from the surrounding nations. But he was led astray by innumerable wives, apparently unable to follow his own counsel so clearly laid out in Proverbs.

These aren’t isolated instances, either. Take the other men in the Bible, particularly in the Old Testament. In fact, it’s rare to find someone who didn’t make a major mistake after finding success. (Joseph and Daniel are two shining exceptions.)

I’ve come to see that one of my main shortcomings has been the tendency to assume that past success somehow predicts the future. This couldn’t be farther from the truth. It seems the opposite is true. When life is going well and we’re receiving recognition, it’s easy to become less intentional about our lives. We can lose the awareness of our own inadequacy, that sense of nearness to God that comes when we’re crying out for strength we know we don’t have ourselves.

It’s a great blessing when we see trials end in glorious victory. But if we relax and put up our feet at these moments, this is prime time for the enemy to destroy the work God has begun. God forbid that the blessings He gives us become idols that keep us from seeking Him. That’s precisely the tactic Satan would like to use to destroy us.

Mark 12:30 was a verse that came alive to me in a new way this year, helping to fuel my inspiration for this blog. Once again, I find it practical and full of rich meaning:

Yes! What’s crucial is that everything we have is engaged in loving God. When we’re discouraged, it’s easier to feel desperate and cast  ourselves completely on God. But when it seems we have energy in reserve, it’s easy to have it be just that: energy in reserve.

The following verse in Mark gives us more direction:

And the second is like, namely this, Thou shalt love thy neighbour as thyself. There is none other commandment greater than these.

There are times when life is going well; we aren’t worried about getting through the day. What would happen if we’d use that extra energy to encourage others who are in the middle of a trial? Do we hoard God’s blessings for ourselves, or do we look for ways to share? Maybe we aren’t suffering. But we probably have in the past. Do we turn a blind eye to others who are in the middle of trying situations? Or do we allow God to soften our hearts, giving us compassion?

I know what it’s like to be doing well myself but still keenly aware of the painful circumstances God has brought me through. There is a heart of compassion that wells up at these times. It isn’t something that needs to be stirred up; it’s a product of God’s refining grace. But it doesn’t stay there automatically. I’ve been learning that the hard way the past several months.

Success is thrilling. But ironically, it’s one of the most dangerous things that can happen to us. We need more intentionality when things are going well, not less. Let’s pray that God will help us consistently love Him with all of our hearts, even when we’ve been blessed with good success.

4 thoughts on “Hard Lessons in Success”