Bought Out by Them 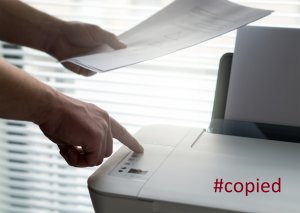 It’s possible that we are really, really dumb. At least when we youth live in our universe as Christians and think that that universe is not affecting us at all. Yet it seems to me that we really are clueless at times. We are essentially standing in a virtual line with the rest of the world, chanting over and over the same things that they say, dancing the same virtual rhythms that our terrestrial neighbors are, and occasionally glancing over at them to make sure everything is coming out right, and then boasting to each other of our originality!

This is real. The gay church down the street suddenly decided that the only word in the Bible with any meaning was love (and then stripped that of any biblical meaning as well). We look at that and can easily recognize that they are being swayed by the prevailing zeitgeist¹ to believe what they do. But we fall into the very same trap, at times! We Christian youth fastidiously follow all the streams of thought that the rest of little-thinking earth dwellers do, then seem to think that we really have the corner on free thinking.

If we could just sit down and agree on which areas of thought and life have changed the most dramatically in the last 20, 50, or 100 years in America, and observe whether the church has changed dramatically on these things as well, we might be a little wiser.

Since we can’t sit down together and discuss this in person, I’m going to propose my ideas and let you think them through and send me an email or respond in the comments with your observations. Here are three areas of life in which I believe we have repeated the world’s mantras without thinking them through:

How many times have you heard Christian youth say something like, “We need to show Christ’s love to people and not turn them off to the gospel!” or you get the picture that they despise street preachers because they “don’t reach people very well”? I used to be that way. I used to think that street preaching was so annoying and didn’t work. Then I got to be friends with a couple of people who regularly did street preaching in various states in the US. They convinced me to go with them, which I did, very dubiously. And I stood up there and “yelled” the gospel at people right along with them. I’m still not very convinced that it’s the best evangelism strategy. But something changed in me that day. I realized that much of my hatred of street preaching was actually me being ashamed of the gospel.

But that is our current cultural mood. The prevailing idea is that biblical truth is something shameful, bigoted, and antiquated. And even though we believe the Bible, I think we have also been swayed – to some degree – with the rest of the unthinking masses to be ashamed of the gospel.

Let’s stand with our gospel. If we really believe that it is the good truth for the world, then let’s be unashamed participants in its declaration. And let’s have lots of love for that world. The sort that gets Truth out there where it can save people, even though it potentially hurts us.

America underwent what was termed “the Sexual Revolution” in the 60’s. That revolution was the result of the rejection of God by the general public in America. It was only after Americans generally rejected God that we suddenly “discovered” that we could try to have no rules in the area of sexual norms.

Now, of course, our churches don’t allow “pick-your-gender” rhetoric or encourage gay marriage. But I suggest that we have been influenced by our culture on this issue as well. That influence is seen in two ways, possibly more: being ashamed of sexual innocence, and pretending that there is no connection between the way one dresses and the amount of sexual attention that they receive.

America has gone from having her entertainment be the neighborhood clown and occasional circus, to having built herself into the entertainment capital of the world. In fact, currently, America’s $717 billion-dollar media & entertainment industry accounts for a third of the entire world’s M&E industry, despite America making up a mere 4.27% of the earth’s population!² We’re going nuts over being entertained, and that shows itself everywhere.

But honestly, are we Christian young people any better than average America? It’s so easy to take  “doing stuff for fun” as normal; we take it for granted that if we announce a Spikeball tournament, more youth will show up than for a prayer meeting. Or we just treat it as normal that most of us are struggling with a YouTube addiction to comedy and sports… Now is our time to take back our time and return to real joy with our King. Now is our time to rediscover love and peace and new creation as we partner with the Lord to take the truth to those who don’t know it, and to know the sort of entertainment that comes from living a life “on the edge”, as the title of Loren Cunningham’s famous book states.

I’m heartened to see many of my peer group picking up on these truths, finding new passion for life in knowing God more. And I fully believe that you will, too. Put some thought into your life. Don’t be bought out by the normal American cultural trends. Be real and be right.

Are you interested in a deeper, more nuanced take of each of these topics individually? Stay tuned for the next couple blog posts, as we dive deeper into these ideas…

7 thoughts on “Bought Out by Them”