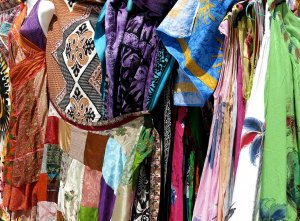 “I’m tired of hearing so much talk about modesty. God sees the heart. Can’t we focus on loving God and the gospel? We’re not going to get anywhere by arguing about dress patterns.”

You’ve heard thoughts like this before, perhaps said such things yourself. It’s an explosive issue, one that has caused church splits, family tension, and lots of confusion. Perhaps you think we’d be better off if we just stopped talking about it.

But before you run off, I’d like to look at five ideas about modesty that I frequently hear. I want to unpack them a bit. Do they really suggest that this subject isn’t important, or are they just an attempt to dodge the issues?

1. We should be more concerned about the gospel than how people dress.

This is true, of course. If we are more worried about how others dress than we are about seeing the gospel advanced, we have a problem. But the hidden suggestion in this statement is that those who are truly concerned about the gospel don’t have time to worry about clothes. And that just doesn’t make any sense. Isn’t the whole message of the gospel one that changes our hearts and our approach to life? In what way does thinking seriously about how we dress contradict our love for the gospel?

I think this could be particularly sensitive for someone who has seen legalistic emphasis on dress without an understanding of the gospel. Perhaps some of you are fed up with the legalism. I’m encouraged to see you choose to believe in God and not stake your relationship with Him on your appearance. But we can still be responsible about our dress, guided by the Spirit, relying on God’s word and His grace for wisdom.

I think this statement can be appropriately turned into a question: “How should gospel-loving people dress?

2. Modesty is really about the heart

In other words, you can be modestly dressed and have a proud, ungodly heart. And as Peter writes, our adorning should be hidden in the heart, not outward appearance.¹ There definitely is a need for a modest, humble spirit. There are issues that must be dealt with in the heart that no amount of external efforts can transform. This is all true, but there’s nothing logical about suggesting that this makes outward appearance irrelevant.

Our clothing choices alone cannot constitute a life and example of godliness and purity. But if our hearts are pure, shouldn’t our appearance be consistent? There may be cases of ignorance where someone has a blind spot and fails to see how his or her dress is less than godly. But if you’re fighting exhortations to dress modestly by appealing to the heart, that’s just not going to work. A pure heart will seek pure choices.

3. We don’t need to be stuck in tradition

Perhaps you feel your church is dogmatically sticking to traditions of dress for no good reason. Your community insists on adhering to certain standards. Or maybe you’re just looking at the Anabaptist community at large and its dress seems arbitrary. It seems people are simply conforming to expectations to fit in and not cause trouble.

You could be right. There are segments of the Anabaptist populace that are more focused on maintaining tradition than understanding precisely why it’s important. But even if some have lost their sense of purpose, it doesn’t logically follow that their actions are flawed.

If it were really true that there were no good reasons for traditions of modesty, then they could be safely disregarded. But while staleness of tradition doesn’t make a good argument for anything, it doesn’t make an argument against anything either. So in this case, we’re back to the drawing board. What does God think about how we dress?

In our society today, things have clearly shifted. Expectations have radically changed, as clothing that would have been offensive a century ago has become the norm. Styles change, and why wouldn’t we, too? We don’t need to dress as loosely as the world, but why be stuck up and dress like it’s the nineteenth century?

Here’s the thing: if it was only a style issue, then there would be nothing to be concerned about. It could be the equivalent of adopting cars or electricity. But it just isn’t. What drives the fashion industry today? Let’s be honest: sex. As our culture has accepted all manner of promiscuous activity, they dress to match.

Most of the world is up front about this. They are deliberately highlighting their sexuality in their dress and they enjoy doing so. So why are Christians so ambivalent about this? Is it going to work to adopt the world’s sex-crazed ideas about dress and then act like we’re concerned about purity? I don’t think so.

At the end of the day, though, dressing modestly won’t keep others from lusting, particularly men. No amount of modest dressing will address the dark issues hidden in the hearts of men. Men just need to learn to stop lusting.

Yes, they do. Especially in this day and age, purity isn’t going to come from total isolation from tempting situations. Men need the grace of God to deliberately turn down the appeals to their flesh that are constantly flashed in front of them. But if we are seeking to be examples of purity as brothers and sisters, do we show respect for each others’ weaknesses in how we dress? (Guys, you can’t get off the hook on this one, either.) God forbid that we allow our appearance to appeal to the baser instincts of the opposite sex.

In summary, while there are bits of truth to all of these ideas, none of them show that modesty doesn’t matter. It is certainly true that our outward appearance doesn’t fix all of our problems. Nor is it at the center of the gospel. But this just isn’t relevant. As disciples of Christ, we don’t want to be wrong about the issue of dress.

Right after the fall, God made sure that Adam and Eve were properly clothed. Their fig leaves were not sufficient. God could have simply focused on their sin in eating of the tree. But despite the dire, cataclysmic circumstance of their rebellion, God saw fit to address their clothing. Throughout the Bible, particularly in the New Testament, it’s clear this issue is one that God cares about. It’s nothing to glibly pass over or make excuses for. If God cares about how we dress, we should too.

I’d love to hear thoughts from any of you, especially if you think I unfairly represented the arguments or left some out. And in the meantime, stay tuned for another post that will delve into the positive reasons we should be thinking about our clothing.