Of Black Bumpers and Blackout Curtains 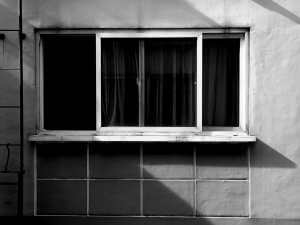 I have two major concerns for this article. First, I don’t want it to be taken as an attack on the plain lifestyle or conservative values. That is an entirely different discussion and not one I’m trying to engage in here. Second, there is a strong tendency of the human heart toward judgment. If, in the reading of this, you apply these principles in condemnation and judgment toward others, you will do more harm than good. This article was written by one who is wrestling with how to live sacrificially amid the superabundance that modern technology has brought. I hope and pray it can be read in the same spirit.

As Anabaptists, we label ourselves a “plain” people. Most of the things that make us plain grew out of a desire to maintain a simple lifestyle. Black cars were the cheaper, simpler option in the days of the Model T, and so black vehicles are the plainer option today. The addition of a tie to a suit jacket was an unnecessary fashion statement, so the plain suit was chosen instead. Our homes and meeting houses were of simpler design than many of those around us.

Black, however, is no longer a simple color for vehicles. The plain suit, though still a worthy part of our heritage, no longer makes the same statement it once did. Our houses and lawns are rarely what an objective critic could call either simple or plain. We may be the “plain” people, but are we actually examples of true Biblical simplicity?

I think I can best explain Biblical simplicity through an analogy. During both world wars, the war effort went far beyond the fighting on land, air, and sea. Civilians contributed nearly as much to the war as those that saw active combat. Blackout requirements, for example, meant that windows had to be covered, lights could only be used dimly, and headlights on cars had to be covered, making traveling the streets at night a hazardous undertaking. Tires, gasoline, cars, coffee, sugar, meat, cheese, and canned milk all were strictly rationed. The war brought America and other nations out of the Depression, but rather than spend their new wealth on bigger houses, new cars, or more toys, they saved it and invested it in war bonds and other war contributions.

What is notable is that entire nations did all of this without protest. Sure, there were some that protested or circumvented the laws, but on the whole, people complied willingly and even went above and beyond in contributing to war bonds and other measures to support the war effort. All of this was done under the double strain of trying to continue normal life with the majority of the male workforce away fighting. Fathers, husbands and sons were off risking their lives, and still the people willingly scraped by on as little as possible, gave their money to the government, and worriedly watched the casualty lists for the names of their loved ones.

Why did they do this? What allowed them to endure such hardship in silence? Were they just tougher than all the modern people rushing to the store for toilet paper when supplies were running out? They may have been, but that is not the main reason. The biggest difference is that they had a cause. The British, Americans, and Russians were all fighting for their national identity and freedoms. Everything they stood for and believed in was on the line. The Nazis in Europe and the Japanese in the Pacific were both expanding rapidly, hungrily eyeing the lands of their neighbors. The Allied peoples were galvanized into action both by the fear of what would happen if they failed and by the firm belief that their cause was just and well worth fighting and dying for. And so they sacrificed and gave and suffered and died without murmur or complaint.

An Example from History

Our tradition, the apostles, and Christ Himself all call us to this type of lifestyle. One of the most stunning examples of this from the Anabaptist days comes in the form of the Moravian Brethren. The Moravian Brethren came out of a period of intense persecution into a time of relative peace and prosperity. Rather than allowing the fires of faith to slack off when persecution faded, they instead channeled their new resources into an intense missionary effort. They started a prayer chain that ran uninterrupted around the clock for one hundred years. Despite an early missionary mortality rate of about eighty percent, the Moravian church marshaled her resources to send out missionaries to Europe, the Caribbean (where they lived as slaves), the Native American tribes, Australia, Greenland, South Africa, and beyond. This was made possible because the Moravian church had a vision for their mission. Because they took the Great Commission seriously, they willingly subscribed to a rigorously simple way of life so that the Good News could go forth.

The Example of  Paul

The Apostle Paul is another great example of this type of living. We all know the story of how he lived, undergoing great hardship to serve the cause of Christ. He was beaten, shipwrecked, cast out by his fellow countrymen, and, ultimately, beheaded. He says, in fact, that if it were not for the hope of eternal life, his life would be more miserable than anyone else’s. After all, why does it make sense to spend your whole life traveling mostly alone, relying on the support and goodwill of others, and suffering all the things that Paul suffered? Surely there’s a more comfortable way to live. And there is. Paul says so himself. “If the dead aren’t raised,” he says in I Corinthians 15:32, “we may as well eat and drink and make a comfortable life for ourselves.” But the dead are raised. There is something beyond. There is a cause beyond this life, and Paul sacrificed everything for the glory of serving that cause.

The Example of Christ

Christ Himself spoke clearly about this issue. When people wanted to be His disciples, he insisted that they be willing to leave everything behind. “Foxes have holes and birds have nests,” He said, “but the Son of Man has nowhere to lay his head.” He went through his ministry owning nothing. When the Devil offered him food, glory, and the entire world in return for service, Jesus cared nothing for it. In the Sermon on the Mount, he offered us the following advice. “Don’t worry about food, raiment, or all of the other things that Gentiles seek after. Instead, seek the Kingdom of God, and His righteousness. Do this and all the other things will be added unto you.” In Matthew 19, he goes even further, stating that it is nearly impossible for a rich man to enter heaven. God does not bless us with prosperity so we can amass wealth and pleasure for ourselves. Instead, all our resources are to be directed toward the service of God. Let Him take care of the physical things we need. Jesus left the glories of heaven to come down to die on the cross for us. Why? Because of the hope of a greater glory he saw beyond. He also asks us to leave the things we find so glorious here on earth. Why? Because he offers us the opportunity to share in that same glory with Him.

The accomplishments of the Moravian missionaries offer indictment enough on the pitiful efforts we are putting forth today. There is a study that compares the standard of living today with various times in the past. It accurately describes the condition of the developed world today as superabundance. Using hours worked as the basis, luxuries and basic resources alike have become dramatically more and more affordable since the 1980’s. And if you go back another century to the 1850’s, it gets even more staggering. Sugar, for example, was easily accessible to the working class then, but it took two hours and fifty minutes for the average factory worker to be able to earn one pound of sugar. For the same amount of work, the average factory worker today would be able to buy two hundred eighty-eight pounds of sugar. And sugar is not an outlying example. Everything from the amount of meat we eat to the number of things we own to how fast and far we can afford to travel has increased dramatically. We can own and do things that even the elite in previous centuries couldn’t afford.

The resources we have today, compared to the resources of the Moravians, is simply staggering. The question is: what are we doing with them? We are continually getting more and more prosperous, and our standard of living rises along with our prosperity. But what if it didn’t? What if we were content with food and raiment, as the apostle admonishes us to be? What if we did as the Moravians did, keeping our standard of living low and channeling everything extra toward the Kingdom of God? What could we accomplish if even one congregation did that? If just you did that?

“To whom much is given, much will be required.” God has given us astounding prosperity. We have access to riches that even kings and elites of the past would have envied. True simplicity isn’t found in placing a cap on money spent, places gone, or things owned. You don’t live simply just by spending less than $40,000 on your personal vehicle. Simplicity isn’t found in rejecting the internet, cars, or electricity.  “Plain” living rejects things in order to maintain a lifestyle. Christian simplicity is not found in the rejection of extras; it is found in the wholehearted pursuit of the Kingdom of Heaven. Am I working single-mindedly for the Kingdom of Christ, or am I too busy gorging myself on my superabundant lifestyle?

And unto the angel of the church of the Laodiceans write; These things saith the Amen, the faithful and true witness, the beginning of the creation of God; I know thy works, that thou art neither cold nor hot: I would thou wert cold or hot. So then because thou art lukewarm, and neither cold nor hot, I will spue thee out of my mouth. Because thou sayest, I am rich, and increased with goods, and have need of nothing; and knowest not that thou art wretched, and miserable, and poor, and blind, and naked: I counsel thee to buy of me gold tried in the fire, that thou mayest be rich; and white raiment, that thou mayest be clothed, and that the shame of thy nakedness do not appear; and anoint thine eyes with eyesalve, that thou mayest see. As many as I love, I rebuke and chasten: be zealous therefore, and repent. Behold, I stand at the door, and knock: if any man hear my voice, and open the door, I will come in to him, and will sup with him, and he with me. To him that overcometh will I grant to sit with me in my throne, even as I also overcame, and am set down with my Father in his throne. He that hath an ear, let him hear what the Spirit saith unto the churches.

4 thoughts on “Of Black Bumpers and Blackout Curtains”