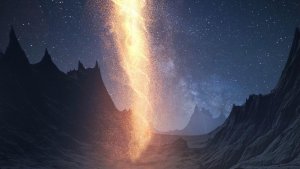 In a previous post, I started a three-part series on the Holy Spirit—a topic that is often either ignored or misunderstood among Christians. In that post we surveyed the Spirit’s “hovering” presence which brings about creation and new creation. But the Holy Spirit’s roles are as multifaceted as one would expect for a member of the Trinity. Here it is the Spirit as God’s temple presence that I wish to explore.

To do this, we first have to think about tabernacles and temples in the Old Testament. The topic of “temple” in the Bible’s storyline is rich and powerful (ask me about it and I’ll give you my full and hopefully inspiring spiel). A temple is basically “God’s space” on earth. It’s what the Garden of Eden would have remained like, if our first parents had not desecrated the place by their rebellion. As we read in Exodus and Leviticus, there are lots of cleansing rituals required to enter and serve at the Israelite tabernacle / temple. This is precisely because the tabernacle / temple is the place where God’s presence resides in the midst of a fallen world and a sinful people.

Over the tabernacle in the wilderness, God’s fiery glory cloud rested—the shekinah (Exodus 40:34–38, Numbers 9:15–22). The shekinah was the pillar of fire and the pillar of cloud that led them through their harrowing journeys. This was God, present with them.

The pillar of fire resting over the tabernacle was a visible symbol that God’s very presence rested over the mercy seat inside the tent. He was with his people, as he had covenanted: “I will dwell among the people of Israel and will be their God” (Exodus 29:45 ESV). There Israelites could find mercy, forgiveness, and cleansing. There they could worship their God, share a meal with him, and simply know that they were close to him.

But they could never go inside. The tragedy of the fall is that no humans are fit to enter God’s temple, to be in his presence. The weakness of Israel’s covenant with God was that the vast majority still could not enter—they were too sinful, unclean, and stubbornly hard-hearted. Specially designated priests could enter certain parts, but only one man throughout all Israel could ever enter the presence of God in the Holiest Place—and only once a year on Yom Kippur (the Day of Atonement).

The Spirit in the OT

Throughout the Old Testament, God’s Spirit would “come upon” various individuals or “fill” them for specific roles or tasks. Bezalel, for example, had God’s Spirit which gave him artistic gifts (Exodus 31:1–5). God’s Spirit rushed upon Samson and Saul—temporarily, in both cases—so they could do exploits (Judges 14:6, 19) and prophesy (1 Samuel 10:10). David as king had the presence of the Spirit (Psalm 51:10) to fulfill his leadership role. But none of these individuals ever thought that these interactions with God’s Spirit lessened their need for God’s temple presence; that was not the Spirit’s role then. When David wanted to be close to God, he did not look to the Spirit who was guiding him. He went to God’s tabernacle. When he and others were kept from the tabernacle / temple, they wrote psalms expressing their longing to be there (Psalm 27, 42–43, 63, 84). God’s temple is where his glory cloud rested.

But the prophets—specifically Ezekiel (36–37) and Joel (2), but also Isaiah (32:15, 44:3)—spoke of a new day dawning, where God’s Spirit would be poured out on his people in a much deeper, more profound, and permanent way. And the Spirit would be poured out not just on certain leaders to help them fulfill certain callings, but on everyone—all of God’s people from leaders to male and female slaves (Joel 2).

Temple and Spirit in Jesus’ Coming

John’s Gospel opens with an announcement that in Jesus, God has “tabernacled” (John 1:14) among us. In him, “we have seen” the glory cloud of Yahweh (v. 14). At Jesus’ baptism, the Spirit rests upon him (John 1:32–34), signaling not only the dawn of new creation (see previous post) but that God’s presence in its fullness rests in this new “tabernacle.” Jesus shortly thereafter announces that specifically through his death and resurrection, he will become the way to access God’s presence (John 2:18–22).

In John 7, Jesus announces the imminent fulfillment of the prophets’ promise that God would fill his people with the Spirit. John then gives an aside, saying that “as yet the Spirit had not been given, because Jesus was not yet glorified” (John 7:39). In John’s Gospel, Jesus’ glorification refers to his death. What does that have to do with the giving of the Spirit? Part of the answer reveals itself if we have started to pick up hints that the Spirit’s outpouring and God’s temple presence may be about to merge. Remember all the rituals and stipulations surrounding Israel’s tabernacle / temple? The temple is the one place where God’s presence actually resides; so it must be kept pure and clean. The reason that the rank-and-file could not enter was that they were not pure and clean. Priests could, but really they were not fundamentally pure and clean either—hence constant cleansing rituals, constant sacrifices for their sins and for the people’s, and limited access even for them (see Hebrews 9–10).

But what if God’s people were truly, fully cleansed? What if their sins were fully forgiven, perhaps by an ultimate sacrifice, a final Yom Kippur? Jesus’ disciples were about to find out—after their master’s body had been destroyed and raised up three days later (John 2:19–21).

In John 20, after Jesus’ resurrection, he appears to his disciples. He breathes on them and says, “Receive the Holy Spirit” (John 20:22). Soon after, he leaves them—waiting.

Temples of the Spirit

Forty days later, the prophecy of Joel is fulfilled. Not by Jesus’ twelve apostles alone, but by the entire group of 120 (Acts 2:1–4). Peter runs out and preaches his first sermon. Jesus, he says, has been raised and seated at God’s right hand. He has poured out the Spirit on his people, as our prophets foretold! The new day has dawned (Acts 2:16-21, 32–33).

But what did that first outpouring of the Spirit look like? Little pillars of fire, resting over the heads of each of Jesus’ people. Little glory clouds of Yahweh. And just like that, each of those rank-and-file people became little temples housing God’s presence.

Think about this: both when the tabernacle was dedicated and later when Solomon’s temple was dedicated, the glory cloud of Yahweh so filled the place that even Moses himself (Exodus 40:34–38) and the consecrated priests (1 Kings 8:10–11) could not even enter the building for a time. And now, the temple presence of God has suddenly taken residence within people.

The staggering significance of this is hard to overstate. In a way that could never have been true before, God’s temple presence was not confined to a single building. God’s people were no longer blocked from entry, or given some access only after performing sacrifices and rituals meant to remind them that they were not pure and clean. Jesus had sacrificed himself for them, had forgiven them, had cleansed them. They now, with God’s shekinah above their heads, were temples of God’s Spirit.

Paul writes about this experience of all new covenant believers. In 1 Corinthians 6 as Paul is exhorting his readers to flee from sexual immorality, he tells individual Christians that their bodies are temples “of the Holy Spirit within you” (1 Corinthians 6:19). In fact, God’s indwelling presence in believers is so close that Paul can say that they are “one spirit” (1 Cor 6:17) with the Lord. This is why they must have nothing to do with sexual sin—it’s not merely “wrong,” it’s temple desecration. Paul also speaks of the church corporately as God’s temple; 1 Corinthians 3:16-17 reads concerning the church, “Do you not know that you are God’s temple and that God’s Spirit dwells in you? … For God’s temple is holy, and you are that temple.” Thus, they must not destroy the church through division or disunity (1 Corinthians 3:17); this too is temple desecration.

We don’t see a literal “tongue of fire” over our heads when we look in the mirror. Neither did the disciples after the day of Pentecost. It is often hard for the fact to sink in that we are mini temples; that God’s Spirit really does reside in us. It probably was hard for this truth to sink in to the Corinthians, with all their dysfunctions. But for those who have gone to Jesus, our true temple, and placed our hands upon him as our sacrifice, it is true. Unlike David, when we want to get close to God, we don’t seek out a building far away. God’s Spirit, his pillar of fire, is within us. Let us be careful not to desecrate God’s temple. But let us also increasingly marvel at what the Spirit’s presence has made us: temples.