Covid—and What Happened to Christianity 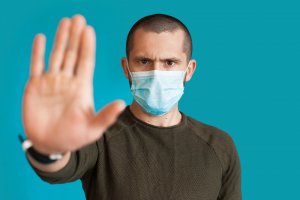 We’re all tired of hearing about Covid-19 by now. In the U.S., restrictions are lifting, and everyone is ready for the social effects of the pandemic to end. But even while it was in its heyday, I tried not to talk about it much. Few issues divide the church more, and today there are many far more important topics to consider, ones that affect not only our bodily health, but also the health of our souls.

However, a social event of this magnitude is bound to have both short-term and long-term effects on very important matters, such as the Christian church. It’s vital to realize what this last year has done to the most important institution on this earth. This post is a short analysis of what has happened to the church, as I’ve observed it.

To start out with, I really hold no position on what Covid policies have been merited. I’m sure that good choices and bad choices were made. I’m not in a position to judge whether the maskers or anti-maskers, vaxxers or anti-vaxxers, are right. I’m tired of the fact that everybody leans strongly toward one side or the other, either believing that Covid was never anything to be concerned about or that anti-maskers are the next thing to murderers.

However, in one sense I’m a conspiracy theorist. I don’t believe that the virus was engineered by the government to take away our liberties. But I do believe that there are forces of darkness and evil who take advantage of every new social or political event in order to bring Christians into bondage. These powers have not been idle through this crisis.

From the beginning, I suspected that the real danger of Covid would be the division of Christians, keeping them from being united in worship. But I had no idea the extent of bitterness that would occur. I just thought that the biggest issue would be loneliness and separation—I knew that this would be a great test for our churches. I did not know how, or how badly, we would fail.

Because we have failed. This issue should make obvious to anyone how badly the church can be divided.

Before I go on, please hear this: I am not leveling criticisms at any individual. If none of what I say describes you, then great. You are doing well. Just please help us heal this divide.

Back to the subject: Why is it that basically everybody has taken a side? Why do you either believe that wearing a mask and getting the vaccine are the only ways to love your neighbor, or believe that the powers that be are pushing dark agendas to take away our rights?

The point is not that half the church is on the wrong side, the point is that the whole church has allowed itself to be defined by an artificial political divide intended by the enemy to destroy us. In my short life, I have seen that the Democrat–Republican dichotomy is what lures Anabaptists into voting—they come to believe that half the nation is letting everything go to the dogs. “The fate of many hangs by a thread, and therefore we must vote.” This argument is used by people on both sides of the liberal–conservative divide (even those who consider themselves independent but who always vote on one side).

When Anabaptists get drawn into the political discourse, they tend to become defined by it. They pick one moral calculus, judging everything by social justice, or “family values,” or libertarianism, or whatever their deepest-held values are. Then they make their decisions based on their chosen calculus, not seeing that it has its flaws.

Covid is an example of the sad truth that, even when someone is able to see the issues and benefits on each side of the political divide, once they get involved in the conversation and try to vote in the direction of good or justice, they quickly become joined to one side, whichever side they cast their first few votes on. They no longer have as clear a prophetic voice, but start to simply repeat the wisdom of the world (or of one half of the world). I’ve witnessed this in men I deeply respect.

I’m not claiming to be in the center, the best of both worlds, or to have a prophetic voice myself. But it is clear to me that few people are listening to anyone else. Find me a person on either side who can accurately and charitably depict the position of the other side without misrepresentation. They are very rare.

Few care to hear the other side. Many think their adversaries are sold to an ideology. Otherwise kindly and thoughtful men have resorted to mockery, name calling, and straw man attacks. Have you heard the names that they’ll call those who disagree with them?

The issue is not that they are acting in an unChristian way, but this—what does this kind of interaction mean at its root?

People interact like this when they are talking about those who are outside of their own people group. Racists belittle other ethnic groups. Nations belittle other nations. Ideologues belittle those of other religions or philosophies. Clearly, those who speak of others in this way no longer see all Christians or even all Anabaptists as their brothers. Instead, these people have created a new “in group” to which they are identified. Christianity, to them, means conformity not only to Christ, but also to the artificial boundaries they have created to keep either the “woke” or the “conspiracy theorists” out. When anyone who disagrees with you is not simply mistaken but malicious, there is something very wrong with you. Unfortunately, too many people on both sides have been drawn into this type of thinking.

Another evidence of the extent to which we have allowed ourselves to be divided can be seen when people hear a criticism of individuals who take the same side they do. Their immediate response seems to be, “No way! That’s misrepresenting us. Nobody is out here thinking (insert belief here)!” It should be abundantly clear to anyone that many people on both sides either explicitly or implicitly believe very wrong things. But those who have created artificial “in groups” and “out groups” for themselves quickly grow blind to this. They are incapable of criticizing their own group and incapable of respecting the other group.

I don’t want to stop here. There’s no point in bringing up this issue without seeking out ways of solving it. And I believe that, through the Spirit of God and through all in whom the Spirit dwells, the church can be built up on the true foundation of Jesus Christ, excluding false foundations of conservatism, social justice, empathy, sectarianism, or whatever the most common ideology is in your church or among your friends.

The mark of the Christian church has always been that Jews, Gentiles, rich, poor, city dwellers, and farmers worship side by side, eat the same food, and wash each other’s feet. Let’s return to that.

But it will require everything of us. We will need to lay down our lives, and, what’s worse, our conveniences or time or values, for those who are unlike us in every way but one—their love of God. We will need to come out of doomsday fears and be filled with the power of the Spirit. He is no respecter of persons. We will need to let him humble our pride and reorient our loves.

The church of Christ has not yet fallen. It still has the power to withstand the gates of hell. But that power flows through us from God. Let’s not taint it with our aspirations or belief systems, or dirty our hands by fighting the principalities and powers using their own methods and discourse. Let’s catch the vision of the triumphant church and turn that vision into actual deeds of love toward our brothers and sisters in Christ, those for whom our Lord died and rose again.

The way of life that he gives us is to the Jews a stumbling-block, and to the Greeks foolishness—but to us, the cross is the power and wisdom of God through Christ. May you live in the power and joy of his resurrection, clinging to the faith out of love and not out of fear.

Lynn Martin’s alma mater is the University of Maryland, and he makes music with might and main. He enjoys Brahms and brown sugar. He cares about Christianity and captains the Curator with a number of colleagues. (This is a poetry and prose publication that encourages Anabaptists to be excellent authors.)

4 thoughts on “Covid—and What Happened to Christianity”