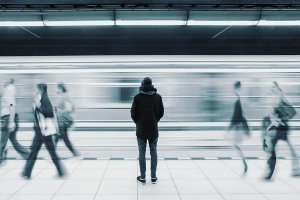 New York City is not all Manhattan—skyscrapers, taxis, and “no sky to be seen.” There is Queens, my big-little borough, with brick apartment buildings decorated in ivy and graffiti, Spanish music wafting through the streets, and roadside vendors. Living in a city means there are people everywhere—in my face, at the crosswalks, in the shops, clomping around in the upstairs apartment, partying at midnight, or on my front porch.  Visages of people etch in my memory. Some are laughable and some heartbreaking. There are people with sad eyes, sparkling eyes, morose expressions, and masked smiles. I see all these things, but what does Jesus see?

On a cloudy but pleasant Tuesday I stood handing out gospel tracts and attempting to start conversations with those receiving them. A rough-looking fellow with a wig, dried flower chains wrapped around his neck and arms and mud smeared across his forehead approached me. Trump was Chinese, he claimed, and stated bizarre false facts about the founders of our country. He declared he knew things about Hinduism that even Hindus did not know. Each time I attempted to share about Jesus, he went off on some other warped rant. As he went on his way, I couldn’t help but laugh at some of his strange notions, yet I also felt sad for him. They are blinded, broken, and hopeless without me, their Savior.

It was a rainy and wet day, so we set up a table of free Bibles and other literature in the Jackson Heights subway station. People jibber-jabbered, boots clomped up and down steps, vendors shook empty paper bags begging to be filled with churros, and squealing subway wheels echoed through the tunnels. The people passed by, some running to catch their subway and some just ambling. “Hello sir, ma’am… have a wonderful day.” I repeated and invited them to receive a gospel tract. I reminded myself that these people are souls that are hungry, empty, and longing for more, and God filled my heart with intense compassion. I saw curly-headed fellows with empty eyes, young women flaunting themselves, elderly, homeless—all nationalities—walking right past me. It was a happy/sad feeling. I loved watching some people’s surprise to hear a happy greeting from this masked human. I didn’t have any unusual conversations on this particular day. A failure? No, I will not call a greeting a failure or underestimate the mere act of handing out Gospel literature. The light had shone and the seeds had been planted. The seeds fall on different soils and I have promised to break hearts of stone.

The wind was crisp as I briskly walked the Astoria streets. I had asked God for a contact in this area of  New York City, a Muslim woman, to be exact. About a week ago on my first visit to Astoria, I met her, the answer to my prayer, and the owner of a scarf shop. On my last visit she gifted me a scarf, in true Middle Eastern fashion. Today on my second visit we shared tidbits of our lives and then she randomly asked a few questions along these lines. Why did no one help George Floyd in the moment? Why did they just turn a blind eye? So we discussed people’s hearts and then I gifted her the story of “The Great Samaritan.”  I taught my people in stories and have equipped you to do the same.

One evening we sat in an aging and disheveled apartment and chatted with our Bengali friends, ate delicious ramen together, and laughed. We discussed demons and angels with the thirteen-year old full of questions, and then later listened to the mother lament about her dysfunctional and abusive husband. I saw God stirring longings in this woman’s heart for something more. I also saw her beautiful heart of compassion in her care for her aging mother. I came to be a light into their darkness and will use my people to be a city on a hill.

One Sunday afternoon, my co-teacher and I labored over vocabulary pronunciations and laughed with our students. I ate too many meringues after class—the ones that kind-hearted and lively Tik bought. Then there was the Thai church service after the ESL class. Tik translated from Thai to English for the pastor. I attempted to hide my laughter as Tik’s dog (who also attends services weekly) roamed in circles, chewing on his squeaky toy, then randomly at one point began to bark. That is not quite the highlight, though. The highlight was communion together, heartfelt worship, and a time of fellowshiping over food. I left feeling warm and happy. We, too, broke bread together; continue to do so with my family.

Again, I spotted one of those brothels, disguised as a spa. Tragically, there are many. Sadness and compassion for the broken women behind the walls filled me. Two weeks ago, I watched a documentary on trafficking. I heard stories of tragedy and stories of hope. I have begun to pray that the women would have dreams, that they would be rescued, and that God would continue to equip and call his people to this ministry that requires so much commitment and accountability. I too reached out to the sinners, the prostitutes, and healed them.

Standing at Margaret Sanger Square, I watched a woman break down into tears over the life of her unborn babe, the uncertainty of his or her being alive, and her status before a Holy God. I heard words of hope minister to her tender and aching heart. I watched woman after woman go into the glass doors labeled “Planned Parenthood” to allow the abortionist to snatch away another heartbeat— a precious little human life. I too, stood in the gap, died upon that tree, so that they may have life, they and their offspring.

What does my Jesus see beyond the hearts yearning for more or the faces labeled “lost”? What does your Jesus—our Jesus— see in the masses of humanity upon this earth?
What should you see beyond the mask, the smile, the tears, the facade?

What do we see in the people we meet at the street corner, the store, or along life’s journey? Forget the visages that startle us into fear or a judgmental heart. Ignore the doubt that says, “impossible to be redeemed.” Jesus looks down into each heart darkened by sin and says, I see destiny.

3 thoughts on “I See Destiny”