I Won’t Be Voting Tonight. Here’s Why. 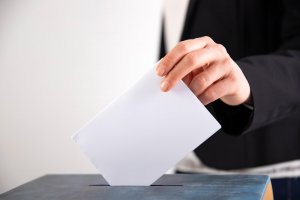 The 2020 election is a big deal. It’s the most important election in American history, just like every other election. American democracy is resilient; we’ve survived moments of terror that turned out to be nothing. Remember all the people that moved to Canada when Trump was elected? Of course you don’t. It seems reasonable to expect our country to move forward at least relatively smoothly, just as it always has, right?

Maybe. Let’s face it: whatever 2020 has been, it certainly hasn’t been normal. Everyone is tense, worried that the country is about to go off the rails. If the wrong candidate wins, most people think we’ll be in serious trouble—maybe we’ll even see the end of American democracy. This might be an overreaction. But maybe it isn’t. We can look back to other times in our history—the American Revolution, the Civil War, the Great Depression, both world wars, civil unrest in the 60s and 70s—that seemed frightful but we managed to survive—thrive, even. But surviving past turbulence hardly guarantees that the nation will always bounce back. We already know we’re at a point of crisis. At this point, it’s yet to be seen how much long-term damage we’ll suffer.

It’s impossible to be unconcerned. But how should this concern be appropriately channeled? Passivity isn’t a Christian virtue, so simply sitting back and watching seems like a bad strategy. For many, this means it’s time to get out and vote. How can we let such an important moment pass without playing a part? If the church doesn’t contribute to the direction of the nation, doesn’t this ensure things won’t end well? These are fair questions. There are two primary responses I have. First, I want to attempt a realistic view of where we are as a nation, including the choices in front of us. Second, I want to propose an active strategy for the church; we can all agree that we should be doing something, I think.

The nation is deeply divided. It’s difficult for either side to give any consideration to the other side’s perspective. What happens if one side points out a potential flaw in the position of the other side? (Hint: it’s not regular, rational dialogue.) “Wait, did you just say that my candidate is guilty of something terrible? That’s awful! That just proves how desperate your side is to make up stories, because obviously there’s no way that accusation could be true.” Perhaps not everyone is guilty of this level of silliness. But I’m afraid many are—probably most. It’s to the point that criticism from the other party is seen as validation. The other side is so terrible that if they don’t like what we’re doing, we must be doing something right.

I’ll be blunt: I don’t see how Christians can look at this mess and feel comfortable joining either camp. There are far too many issues with both sides to warrant anything approaching an endorsement of either. Are there individual points where one side makes a better case than the other? Certainly. Does one side pose more dangers than the other? Possibly. But I don’t understand how Christians can feel either side represents their values. John Piper put it quite well:

I remain baffled that so many Christians consider the sins of unrepentant sexual immorality (porneia), unrepentant boastfulness (alazoneia), unrepentant vulgarity (aischrologia), unrepentant factiousness (dichostasiai), and the like, to be only toxic for our nation, while policies that endorse baby-killing, sex-switching, freedom-limiting, and socialistic overreach are viewed as deadly.¹

But if one side is more dangerous than the other, should we take a pragmatic approach and support the side that is at least not as bad as the other? That’s the argument you’ll hear from those who think we should vote.

What should we do?

Let’s assume that victory for one party would keep harmful new legislation from being passed and even roll back current bad policies. Would this change the spiritual climate of the nation? Would banning abortion or same-sex marriage—if remotely politically feasible—push the nation closer to God and revival? I don’t think so. In our current polarized environment, forcing our morality on others would only contribute to the tension. I don’t see any way around this. Such a victory would be doomed to be temporary and would make retaliation more likely. If we use political force to push our beliefs, what makes us think the same tactic won’t be played right back on us? The more we infuriate the godless, the less likely they are to willingly listen to us. Do we really want to alienate them?

We also can’t forget the example of Christ. When put in a perfect position to spark a political revolution, He flatly turned it down. He told Pilate that His kingdom was not of this world.² Jesus could have used physical force to prevent His arrest, but that was not His way. Christ’s kingdom would come not through force, not through governmental takeover, but by sacrificial love, a love so compelling that it would spread throughout the world despite concerted efforts to shut it down. Do we think this has changed today? Do we think our Christianity is dependent on political change? If God would allow persecution to hit our nation after centuries of freedom, this could serve as a catalyst for revival.

Do I wish for tragedy to strike? Certainly not. Paul tells us to pray that our authorities would allow us to live a quiet and peaceful life.³ I’ll be glad—and quite relieved—if the election doesn’t push us closer to the collapse of society. But if it does, we won’t be defeated. We don’t fear those that kill the body—much less a recession or minor restrictions on religious freedom.⁴ God forbid that we focus on a losing battle for temporal security when our central message is one that transcends our earthly concerns.

But merely abstaining from voting isn’t enough. It’s easy to hold a conviction against political involvement while being more concerned about our own economic well-being than the souls of others. If our nation worsens, it’s imperative that we are prepared to defend our faith. Difficult times bring increased opportunity to share with others. Christ set a great example by spending most of His time with a select group of men. While He influenced crowds with His teaching, it was the transformed lives of the disciples that became the practical means by which the gospel spread. It simply isn’t true that we can only influence others by operating on a large scale. America may collapse, but this will not prevent us from reaching individuals. This is our ultimate goal: the salvation and discipleship of lost souls. We can’t achieve this through political coercion—we’ll just hurt our case—but we can continue to work with individuals, no matter how difficult things become.

So no, I won’t be voting. But let’s avoid passivity. The antidote to bickering politics isn’t indifference. It is devotion to the values of a heavenly kingdom, seen now only in part, but with a promise of complete fulfillment that we expectantly await. I’ll decline the excitement of tenuous political hopes for the transcendence of a kingdom that triumphs either way.

9 thoughts on “I Won’t Be Voting Tonight. Here’s Why.”