How Should Christians Respond to the Protests? 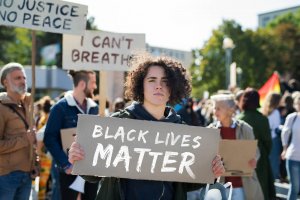 We’re living in a time of unrest. COVID-19 brought disruption that none of us were anticipating. As life starts moving back to normal, we’re met with new issues. The killing of George Floyd sparked outrage across the world. As thousands gather to protest in the streets, reactions from the church—and in my circle of friends—have varied widely. What is really going on? On the one hand, there are those who think the church needs to own responsibility for being complicit in allowing systemic racism that continues to plague our society. Others think the whole thing is left-wing propaganda with no basis in reality—protestors should just go home and stop whining, basically. Obviously, there’s significant discrepancy in how well-intentioned people are processing the situation.

There are many questions we could ask. I’d like to look specifically at the appropriate response to the protests themselves. For the church, this can be tricky business. As Christians, we want to avoid becoming politicized. Our witness for Christ must come first, ahead of all other considerations. With so many differing opinions out there, we don’t want to offend others, especially on issues that aren’t central to the gospel. All the same, once it’s clear an issue isn’t about to go away, we need to know where we’re going to stand. We need to learn to dialogue with those that disagree with us, seeking to understand multiple perspectives. When an issue is fresh and emotionally charged, it’s particularly easy for us to get entrenched in our positions, strongly reacting to arguments that differ from our own. This is a tendency we must avoid.

When people hear about the protests, there are two diverging reactions. On the one hand, there’s sympathy for people that obviously have deep concerns and frustration. “How can we see others suffering around us without sympathizing with their plight?” these people might say. But others only see disruption and chaos that seems misguided and unnecessary. “How is marching down the street waving signs going to help anything? Plus, some of the protests are turning violent and people are actually getting hurt.”

To be honest, both of these reactions make sense to me. At different points in my life, I’ve veered heavily towards one or the other. What’s interesting, though, is that these two reactions wouldn’t need to be contradictory. It’s just that we quickly allow additional feelings to cloud our judgment. Most of us are going to have an inclination to feel annoyed at one of the reactions. “Come on, just because people are waving signs and chanting dumb slogans doesn’t mean they’re oppressed,” the one side might say. “They’re just brainwashed by the leftist media into buying a bunch of propaganda.” But for others, “How dare you suggest that the protests are unhelpful? You’re obviously out of touch with a suffering community.” And back and forth we go, hurling insults at each other, ad nauseam.

Backing away from the fray, we need to establish some reference points that can be appreciated on all sides, at least as Christians. Perhaps most importantly, we need to hold high the example of Christ in showing love and compassion. This holds true regardless of our individual impressions of the race question. I love discussing intricate questions of history, economics, and race—and it’s a subject I read a lot about. This individual pursuit of historical understanding is something I embrace. But there’s no way we’re going to agree on all of these issues. They’re complex. If we weren’t so suspicious that others have sinister motives, we might be able to understand each other better and work towards a common goal, even if we have nuanced disagreements.

I want to break this down a bit more. The failures of others are never an excuse for us to summarily dismiss other humans that were created in the image of God. We live in a social climate deeply divided. We feel justified branding others with a derogatory term that gives us license to assume they’re corrupt with evil motives and shouldn’t be taken seriously—or so we think. It’s a chronic problem on both sides of the political divide. It’s deeply un-Christian. Fulfilling the second greatest commandment—to love our neighbor as ourselves—requires a mind and heart that thinks and cares on an individual level. When we label others, we’re guilty of making snap judgments that we wouldn’t want others to direct our way. We’ve all experienced this and know it hurts. Instead, we need to show deference and be willing to dialogue with those we disagree with. It’s the only way we’re going to make progress.

There are two primary concerns I have in relating to the protests. First, I’m concerned about the way they encourage group-based identification. As Christians, we should be particularly excited about seeing the diversity of race and culture that will be represented around the throne of the Lamb.¹ We delight in seeing fellowship across racial and cultural lines and should be the first people to cheer when it is achieved. Wouldn’t this mean that I’d celebrate the new emphasis on ending racial inequality brought about by the protests? No, it doesn’t, but not because I’m opposed to equality. Let me explain. Instead of moving us towards a proper, Christian view of valuing the worth of each individual regardless of race, our current political climate is weaponizing racial groups and pitting them against each other. Whites are now viewed as an oppressive class that needs to atone for a vague sense of white guilt. Ironically, in the name of support for blacks, assumptions are made about their needs and desires, applying a blanket stereotype—blacks with differing views from the majority of blacks are quickly dismissed. We’re making more assumptions based on skin color, not less. I’m not happy about this. I don’t think the church should be, either.

Second, I’m wary of misguided compassion. There are issues that blacks are facing throughout our country. There’s no way to deny this. But it’s too easy to give token support that doesn’t help resolve problems. Does it benefit anyone to post black squares on Instagram? Perhaps it raises awareness, but awareness of what, precisely? By saying, “I repent of my white privilege,” do we move closer to understanding and equality? I can’t see any way we do. It’s merely a virtue signaling game, one that gives whites a feeling of superiority to lord over other whites who haven’t been so virtuous. (It’s very ironic when a white person tells you that your views are wrong and that “there’s no way you can understand blacks because you’re white.” Oh? But you do?) Nor is it clear that some of the specific things being campaigned for would be helpful. Police reform, sure, but defunding the police? Or is the removal of monuments an effective way of bringing reform? Good motivation to sympathize with others can easily lead to promoting ideas that could achieve the opposite of what is intended.

Having said all of this, I’m also concerned because much of the church doesn’t seem to care.  It’s too easy to sit around and make jokes about BLM. How is that helpful? The correct answer to misguided compassion is responsible, Spirit-led compassion. What does that look like? I’m not sure, exactly. It’s a question that doesn’t come with an easy answer. But I do think it’s only going to happen on an individual level. Let’s look to build and strengthen relationships. Let’s learn more about how to relate to other cultures. We should be the first people to care for and support those who are suffering.

These are difficult, tense times. But they also open many doors of opportunity. We need wisdom to know how to move ahead as a church. Perhaps much of the challenge lies in appropriately balancing truth and love. Let’s exemplify both.

4 thoughts on “How Should Christians Respond to the Protests?”