The Importance of Having Difficult Conversations 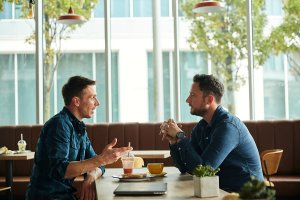 We often struggle to communicate as deeply as we’d like. But this difficulty is especially pronounced when it comes to having hard conversations. When disagreements happen, it’s tempting to run away. Then the next time we’ll foolishly charge into the situation, hurting relationships and just making things worse. Peacefully handling conflict in a way that brings resolution takes incredible patience and wisdom. Few skills in relationships are more valuable, though. I think of the men and women who have inspired me with their ability to calmly handle situations in a way that lowers the temperature in the room—without avoiding issues. This is a skill I am attempting to develop and I’ve learned the hard way quite a lot about what doesn’t work.

Handling conflict is tricky partly because sometimes it’s merely the result of someone being difficult. We all know people who seem to enjoy picking a fight and if we’re honest, we’ve all been that person at some point. But when conflict of this nature happens, the solution is rather straightforward: the offender just needs to be encouraged to calm down. (Of course actually managing to calm angry people isn’t usually straightforward!) The problem is that it’s easy to mistake people with legitimate concerns with those who are just looking for trouble. Any time someone says something critical, whether it’s one-on-one, or in a family or church setting, it’s easy to dismiss them. We can fail to actually consider what they’re saying, or worse, reject it because of their personal weaknesses. Few things make conflict more drawn-out than getting stuck on others’ faults. When considering the concerns of others, we need to begin with a commitment to generosity. We should be slow to pass judgment before we have heard others out, and even in cases where someone is making a big deal out of nothing, our willingness to hear them out will help to de-escalate.

While some conflict would be avoided if people would learn to be more agreeable, this is hardly always the case. Without people to warn us of danger and push us towards reform, we become spiritually lethargic. A strong person will be prepared to give and take constructive criticism—how else could we learn from each other? When relationships are characterized by mutual flattery without friendly encouragement to improve, they are shallow and tiring. When we care deeply about others, we will want to warn them when we think they are making wrong decisions. And more often than not, such conversations will involve disagreement and strong feelings. So I think we do everyone—including ourselves—a great disservice if we want to keep everything calm and free from the potential for conflict. In general, I think we’re probably having less of these kinds of conversations than we should be, whether that’s on an individual or group level. When we live in regular conflict avoidance, we are dangerously caught off guard whenever serious issues emerge. And don’t think for a minute that you can go through life and avoid serious conflict! If you haven’t seen it yet, that’s all the more reason to prepare by wise handling of smaller issues.

So while I think it’s important to have difficult conversations, it’s even more important to navigate them wisely. Here are a few considerations I’ve found helpful.

We can speak the truth unhelpfully

It’s tempting to think that when we say something true and others get upset, it just reflects badly on them. But of course it’s possible to say true things with a bad attitude. When someone reacts to our attitude, it’s easy to say that they’re just trying to avoid what we’re saying. And hey, there’s a good chance that’s true. Whenever anyone comes to us and clearly has an attitude issue, we should still acknowledge anything that’s true. We hate bad attitudes, though, which is why we should go out of our way to be as loving as possible when it’s our turn to say hard things. And if you’re wanting to remind me that Jesus called his enemies snakes, yes I know. He also lived a sinless life, allowed his enemies to kill him, and had no error whatsoever in his words of critique. If his excoriation of the Pharisees is one of the main ways we want to imitate him, something is a little off balance. I’m speaking to myself here, because sometimes it’s very hard to hold back from just giving it to people. But when we are led by God, the thrill of revenge starts to evaporate. I’ve found it’s often replaced by sadness.

What this means practically is that sometimes there are truthful things that we won’t say. This should be obvious, but we often forget it in the heat of the moment. If we know that what we’re going to say is just going to upset the other person, we should be very slow to say it—or at least say it as gently as possible. Often there are little things we can say that we think build our case but are more likely to aggravate than be helpful. Filtering these things out doesn’t mean we’re compromising; it is exercising wisdom. If we know that our words are sure to be rejected and used against us, perhaps we shouldn’t speak.

We need to risk being misunderstood

We should generally refrain from words that we know have no chance of being received. But sometimes we’ll still need to risk being misunderstood, with the hope that we won’t. Often this means we tread softly at first, waiting to speak more of our mind until it’s clear we have at least some working understanding. But as Jordan Peterson famously said in his interview with Cathy Newman, “In order to think, you have to risk being offensive.”

Few things can soften this more than making it clear up front that your perspective is limited. Sometimes it helps to state outright that you’re aware how easily you might be misunderstood. This is a plea for grace from others and will often help them be less likely to react to you as a person.

Personalities also play a role here. While some people need to be held back from speaking their mind whenever they have the opportunity, others are timid, often refraining from talking even when they have helpful things to contribute. These are the people who need to be encouraged to take the risk of being misunderstood, but they have the advantage of being much less likely to provoke. This proper blend of boldness and sensitivity is something all personalities need to work hard to achieve. We should consider our own personality and avoid the temptation to always go with our natural inclination.

Maybe I’m just exposing my personality here, but I have a hard time understanding how bad things can happen while those observing just quietly go on their way. But it happens a lot. When we see something that isn’t quite right, it’s easier to hope someone else takes care of it than to try to help ourselves. And as Christians, I think we often fall for the idea that the most loving thing to do when others have faults is to turn the other way and pretend we don’t see it. While this might be the thing to do with minor faults in relationships that aren’t especially close, doesn’t there come a time when it’s actually unloving to be silent? Of course there are extreme cases, like covering up abuse, where we often end up showing we are more concerned about loving the perpetrator than the victim. But even on a smaller scale, failing to help a brother or sister see a fault can similarly mean that it continues to hurt others. The person who is the least involved in difficult situations might not be more godly; they might just be indifferent.

It’s much easier to talk about others instead of to them. This might be one of the commands of Jesus that we violate most frequently. “I don’t mean to gossip, but have you noticed that Jack has been…?” When we talk directly to people about our concerns, there are numerous advantages. For one, we’re unlikely to take this step unless we have a legitimate concern. It’s easy to gossip about things that are too tenuous to actually present to the person involved. When we talk to the person, we also give them an opportunity to correct their actions. If they refuse to hear us and it’s a matter of biblical importance, then we are free to get others involved—see Matthew 18. In many cases, though, we will clear up misunderstanding and actually leave with a strengthened relationship. If someone knows you have a concern and are willing to bring it to them privately, this will often build respect and appreciation.

Watch out for selfish motives

I’ve had it happen many times to me: I start out feeling genuinely concerned, but as I start to share with others, I realize I’m more worried about proving I’m right than actually helping. What’s tricky about this is that we can be guilty of this kind of unhealthy attachment even when we have something that needs to be said. But when we are driven by a desire to vindicate ourselves or pull others down, any insight we had initially quickly evaporates. We won’t have the grace to have conversations that are actually helpful and we are better off not saying anything. Recognizing this tendency is crucially important, as it’s almost sure to be a temptation. And again, there’s no wiggling out of this one by saying “Jesus called people ‘snakes.’” I think we need to remember what Jesus said about approaching others with faults. We need to first take care of the faults in our life—often arrogance in relating to others’ faults—and then we can think about helping others with theirs.

If difficult conversations are done right, there are few things that are more humbling and helpful for both parties. When we allow God’s Spirit to guide us in lovingly conveying hard things to others, it makes us aware of just how much forgiveness we’ve received ourselves. And, perhaps surprisingly, few things have as much potential to deepen relationships.

5 thoughts on “The Importance of Having Difficult Conversations”