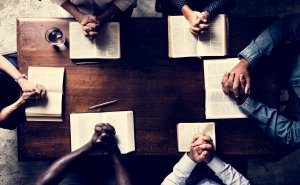 Part 2 of A World on the Move: A Missional Paradigm of Migration.

As a young man, I developed a skewed view of missions. I saw mission work as something that one went and did somewhere “over there.” Multiple times a year our church would have missionaries speak about their mission work. I still remember sitting in the pew with my family, transported to other worlds through pictures, videos, and stories. The narrative I came to believe is that there are vast swaths of the world that are dark, without the Gospel, and waiting for someone to come to them. God called some people to go abroad to do missionary work. The rest remained at home living the good life.

In 2014 I had the opportunity to study for 4 months at the Institute of Global Opportunities in Chiang Mai, Thailand. Through various mission trips to Nepal, Egypt, and India I saw the teeming masses of people who by all accounts had never heard the Gospel. I returned home. I could not shake those images, but they seemed so far away.

In 2018 my wife (Su) and I moved to Boston to study at Sattler College. At the time we had our sights set on the foreign field. As we settled in Boston we discovered a diverse city with large immigrant populations from Asia, the Caribbean, and South America. During the last four years of college, I have been privileged to teach English as a part time job at The Bridge English Training Center. My classes have included students from all over the world: Turkey, Iran, China, Haiti, Venezuela, Russia, the UAE, Chile, Nepal, India, Morocco, Brazil, France, Afghanistan, and Thailand. Those foreign lands I had envisioned as a boy had come to me. They were sitting mere feet away in an ESL classroom in Boston.

This is part 2 of a three-part series intended to call the church to creatively engage immigrants for the sake of the Gospel. Part 1 briefly sketched out the biblical-historical narrative of movement within Christianity. I argued that as the church embraces her narrative of movement, her members will be better equipped to understand and serve our migrant neighbors who have uprooted their lives seeking a place of rest. Now we will examine how engaging immigrants with the Gospel can be a part of ushering in the end of the age by fulfilling the Great Commission (Matt 24:14; 28:18-20). Additionally, we will see how this Gospel activity purifies, strengthens, and adorns the church. In the final post of this series we will examine several practical ways to minister to immigrants in our backyard.

In one of his last recorded sermons in Matthew, Jesus said that the “gospel of the kingdom will be preached in all the world as a witness to all the nations, and then the end will come” (Matt 24:15). We don’t have to move to another country to find our place in Jesus’ peaceful revolution. The unreached have come to us and reside in our culturally diverse cities.1 Our King has presented us an incredible opportunity to join him in his mission. As the church fulfills its mandate of making disciples of all nations by teaching them the “all things” of Christ, and by baptizing them into Jesus’ Kingdom, the church will be purified, strengthened, and adorned.

The church will be purified through discipling different ethnicities and bring them into the kingdom. The process of teaching a new believer the “all things” of Christ forces those doing the teaching and discipling to reexamine their assumptions about what it means to follow Jesus. This is especially relevant for those who have grown up in the church since we often adopt unspoken or poorly articulated practices. At times these practices have burdened new disciples of Jesus. We can learn from the apostles in Acts 15 where they declared that they wanted to lay no greater burden than necessary on the Gentile believers.2

The authors of the New Testament indicate that suffering follows those who follow the persecuted Messiah. Jesus taught his disciples to expect persecution because they are following a persecuted Messiah (John 15:20). The Apostle Paul commended Timothy for following in his footsteps and then declares: “Yes, and all who desire to live godly in Christ Jesus will suffer persecution” (1 Tim 3:10-12). Persecution and suffering further purifies the church in two ways. First, by eradicating the impure motives of seekers such as capitulating to social pressures, longing for prosperity, desiring to have physical needs met, or seeking to save one’s life (Matt 16:25). Second, by eliminating self-seeking motives of the faithful. While no one would wish this kind of suffering on anyone, Jesus is looking for committed disciples who have counted the cost of following in His footsteps and are faithfully demonstrating His kingdom to the world.

Not only does making disciples of all nations purify the church, but it will also strengthen the church. As its members are faithful in living out Jesus’ mandate and new believers from other cultures are being brought in the fellowship, the body will receive fresh vision. While some view different perspectives as being harmful to unity, the church should embody the words of Paul when he said, “God arranged the members in the body, each one of them, as he chose.”3 Additionally, Jesus has given these new members gifts needed by the body.4

The church’s influence strengthens as it becomes more and more diverse. A church with one or several Iraqis in its fellowship is better equipped to reach more Iraqi migrants. Thus the outreach opportunities of the church grows as its fellowship grows. And finally, as the church is purified and strengthened, its testimony will grow stronger in its immediate context as its members remain faithful in fulfilling Christ’s mandate in the midst of suffering that God allows.

The church of Jesus Christ was intended to be adorned through a multi-ethnic body of believers. Few appreciate the diversity of the 1st century city of Antioch and the reason the believers there were first called Christians. Antioch has been called “the citadel of Gentile Christianity.”5 This is significant because up until the time when missionaries came to Antioch, those who were following Jesus were largely considered a subgroup within Judaism. However, as Gentiles began to come into the church at Antioch, those looking on could no longer say they were just a subgroup of Judaism. Hence the name Christian.

Not many years later, Paul writes in Galatians 3:28, “There is neither Jew nor Greek, there is neither slave nor free, there is no male and female, for you are all one in Christ Jesus.” Indeed, the Gospel of the Kingdom transcends any barrier of ethnicity, gender, and socioeconomic status. Jesus Christ has broken the chains that keep us from relationship with Him and with one another. The church of today must see the migration of many different ethnic groups as a movement of God. It is a merciful movement. He is establishing the “boundaries of their dwelling place, that they should seek [Him].6

The work of the church to disciple people from among the nations culminates in a breathtaking picture of worship. The new song reverberating throughout the throne room gives praise to God for his diverse salvation:

“You are worthy to take the scroll, and to open its seals; for You were slain, and have redeemed us to God by Your blood out of every tribe and tongue and people and nation, and have made us kings and priests to our God; and we shall reign on the earth.”7

Austin is a disciple of Jesus learning how to follow Him in the city of Boston where he lives with his wife of five years, Su, their two-year-old son, Emerson. When he’s not studying or teaching English to immigrants he can be found with other disciples, out in nature, or organizing something. He quickly grows tired of small talk, choosing rather to ask deeper questions of faith and practice to learn from those around him.