A World on the Move: A Missional Paradigm of Migration 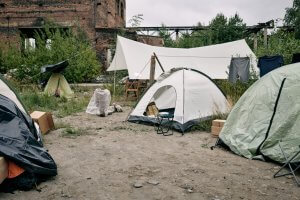 Our world is on the move. Wars, natural catastrophes, and financial desperation are driving people from their homes at unprecedented rates. At the close of 2020, over 82 million people were forcibly displaced from their homes.1 This is equivalent to the city of Richmond, Virginia being displaced every single day.2 Staggering.

Ongoing conflicts in Syria and Afghanistan as well as developing crises in the Democratic Republic of the Congo, Myanmar, and South America have created a steady flow of hundreds of thousands of individuals leaving their homes to find safety elsewhere. Few fully realize the perils of the journey. These are brave souls, placing themselves at the mercy of a humanity who can’t seem to agree whether or not to help them, and if so, how they should be helped.

The contemporary church has a rich history of migration embedded in its identity. As the church embraces its narrative of movement, it will be better equipped to understand our neighbors who are on the move because of civil conflict, natural disasters, and persecution. This is part one of a three-part series intended to call the church to creatively engage immigrants for the sake of the Gospel. Part 1 briefly sketches out the biblical-historical narrative of movement within Christianity. Part 2 intends to show how engaging migrants with the Gospel can be a part of ushering in the end of the age by fulfilling the Great Commission (Matt 24:14; 28:18-20). Additionally, we will see how this Gospel activity purifies, strengthens, and adorns the church. Part 3 will offer practical suggestions for ministering to migrants.

With vast statistics thrown around in the media today, it is easy to become numb to the experiences of the people behind the numbers, the pictures, and the news headlines. As Christians living in North America in the 21st century, we often have a great disconnect in our minds between the experiences of those on the move and our own experiences. We forget that much of our own historical narrative is one of moving. From Abraham to the children of Israel, to those living in the first several decades after Christ’s ascension, we see those following God moving, moving, moving.

The biblical-historical migrant narrative highlights God’s direction in human affairs. In Genesis 12 God calls Abraham to take his family and depart from his father’s house: “Go from your country…to the land that I will show you.”3 God accompanies this command to go with a promise of future blessing to all the families of the earth because of Abraham’s obedience. Abraham obeys God’s command and migrates from his father’s house, eventually settling in Canaan. Jump ahead 400 years and Abraham’s children are migrating from Canaan to Egypt to survive the worldwide famine.4 God uses Joseph, a victim of human trafficking by modern definitions, to preserve Abraham’s descendants. Even though Joseph’s migration to second in command in Egypt was unjust, painful, and even traumatizing, God used him to save lives and to set the stage for the next movement of his people out of Egypt.

Throughout the next 450 years, the children of Israel grow in number through God’s hand of blessing, prospering tremendously to the point where the Egyptian host culture feared their numbers. After enduring the trials of the oppressive Egyptian government, they are finally led out of their bondage by the Lord’s hand through His servant Moses. However, Israel isn’t just uprooted, resettled into a new place, and immediately able to put down new roots. Instead, they spend the next 40 years on the move, living a transient lifestyle. Through these years on the migrant road, they develop into a nation-type in the womb of difficulty. Israel eventually resettles in the land of their father Abraham. However, refusal to follow God’s ways results in judgment through exile.

Within the exile story, God’s justice and sovereignty come into focus. In Deuteronomy 11:26-28, God presents His people with a blessing and a curse. A blessing if they obey His commandments. A curse if they choose to disobey His commandments. God is remarkably merciful and longsuffering with His wayward people. Only after many prophetic warnings of exile does He raise up the Assyrians who sack the northern kingdom of Israel and carry them into exile. The northern tribes fade from history, never to be heard of again. Several generations later, God uses the Babylonians to conquer the southern kingdom of Judah, ushering in the era of the Babylonian exile. The books of Ezra and Nehemiah recount the divinely orchestrated return of God’s people to the promised land after their judgment is fulfilled. But life would never be the same. Eventually, the Roman Empire would come to power and they would still be in bondage until the promised Messiah migrated from heaven to walk among them and to demonstrate a life of movement.

The promised Messiah brought a message of hope and deliverance from bondage. However, the message included surprising nuances Jews living under Roman rule did not anticipate. Even many Christians today fail to consider the expectancy of movement in the teachings of Jesus, His example, and in the experiences of the early church in the New Testament. After a lengthy discourse in Matthew 10 about being sent as sheep among wolves, Jesus issues this command: “When they persecute you in one town, flee to the next…”5 Not only does this command anticipate the need for movement, but it also anticipates suffering as a result of following Christ. While responding to a Scribe’s commitment to follow Jesus wherever He went, Jesus declared, “Foxes have holes, and birds of the air have nests, but the Son of Man has nowhere to lay his head.”6 During the three years of Jesus’ ministry, He lived a very transient lifestyle, moving from city to city preaching the Gospel of the Kingdom and instructing His disciples to do the same.7 Indeed, movement is embedded in the last recorded words of Jesus, the Great Commission: “All authority in heaven and on earth has been given to me. Go therefore and make disciples of all nations…”8

The movement of people played a prominent role in the spread and formation of the early church. Acts 2:5-11, says “there were dwelling in Jerusalem Jews, devout men from every nation under heaven.” When the Holy Spirit came at Pentecost and Peter delivered his first sermon, men from all over the Roman world heard the Gospel right at the beginning. This was the beginning of the rapid spread of Christianity. Later in Acts 8, Saul is “ravaging the church, and entering house after house, [and dragging] off men and women and [committing] them to prison.”9 However, those who were scattered throughout all of Samaria and Judea because of the persecution, “went about preaching the word.”10

Acts 18:2 describes a migrant couple, Aquila and Priscilla. They met Paul in Corinth having left their home in Rome due to the expulsion of the Jews from the city at the order of Emperor Claudius. They later move on to Ephesus and fill a critical role in the Apostle Paul’s life as vital supporters. These migrants could not keep the good news of the Gospel of the Kingdom to themselves. They “reasoned in the synagogue every Sabbath, and tried to persuade Jews and Greeks.”11 God sovereignly timed the outpouring of the Holy Spirit on the Jews in Jerusalem to coincide with the presence of Jews from all over the Roman world to maximize the impact of the first Gospel proclamation.

The narrative of movement is present throughout the writings of the New Testament. For example, the church in Rome struggled to bridge the gap between the Gentile believers and the Jewish believers returning after Emperor Claudius’ death. The book of James is addressed to “The twelve tribes which are scattered abroad.”12 Yet another letter, 1 Peter, begins with: “To the pilgrims of the Dispersion in Pontus, Galatia, Cappadocia, Asia, and Bithynia”13 The author of Hebrews, paints a hauntingly bittersweet picture of the saints of old in chapter 11. He describes these saints: “They were stoned, they were sawn in two, they were killed with the sword. They went about in skins of sheep and goats, destitute, afflicted, mistreated— of whom the world was not worthy—wandering about in deserts and mountains, and in dens and caves of the earth.”14 What a stunning description! These men and women of old were great in courage and trust in their sovereign God. They saw and believed the promises of God and were captivated even though they would die without seeing the fulfillment of those promises in Messiah Jesus. Because of this radical belief, “God is not ashamed to be called their God…”15 These books from the New Testament illustrate from the life of Jesus and His Apostles how movement shaped the experiences of those living in the first century.

It is easy to believe that the narrative of movement ceased after the early days of Christianity. While there were periods of respite, the movement of God’s people continued. The early church suffered much persecution, resulting in scattering and migration throughout the Roman world and beyond during the first six centuries after Christ’s ascension. Later, waves of persecution beat against the Christians of the radical Reformation in the sixteenth century.

Groups on the move included the Anabaptists and the Hutterites. The Anabaptists earned their place in the suffering tradition of faithful prophets and apostles of old. Their in-home Bible studies and radical beliefs about discipleship, love of neighbor and enemy, church authority, and the relationship between the church and the state placed them at odds with the establishment.16 These radical beliefs would earn them prison, death, or a life on the run. On January 21, 1525, a historic baptism occurred at Felix Manz’s house when George Blaurock and Conrad Grebel, among others, were baptized as adults upon a personal confession of faith in Jesus Christ.17 This marked the beginning of the Anabaptist movement that would lead many to give up their lives, to live lives of radical obedience, and to spend much of their lives moving from place to place sharing the Gospel along the way.

The Hutterite brethren of Moravia, descendants of the Anabaptists who had fled north from Zurich, also experienced an intense period of suffering allowing them no permanent abode. They were on the run, hounded by bloodthirsty, greedy men who chased them even out of the woods where they were seeking temporary refuge. Even sympathizers were unable to offer shelter due to the Moravian governor’s orders against such merciful actions. While this intense scattering led to fragmentation for a relatively short period, it strengthened their resolve to create even stronger communities when the pressure let up. After the five years of intense persecution and suffering, they “gathered once more, determined to keep community as wholeheartedly as ever.”18

In this cursory sketch of the biblical-historical narrative of movement, I have attempted to lay the groundwork for immigrant ministry by showing how our own history is marked by movement. As those living in a land of plenty and nearly untouched by the wars and natural catastrophes forcing many to flee their homes, we do well to reflect on the narrative of movement within our sacred texts. In part 2 I will build on this by presenting a case for great commission fulfillment through reaching the immigrants already present around us.

Austin is a disciple of Jesus learning how to follow Him in the city of Boston where he lives with his wife of five years, Su, their two-year-old son, Emerson. When he’s not studying or teaching English to immigrants he can be found with other disciples, out in nature, or organizing something. He quickly grows tired of small talk, choosing rather to ask deeper questions of faith and practice to learn from those around him.