Should Christians Be Excited About the Overturn of Roe V. Wade? 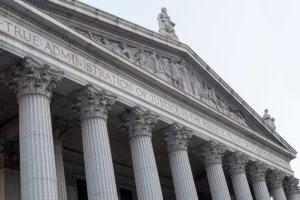 I’ll confess I never really thought it could happen. Even with the influx of new conservative justices, it just didn’t seem feasible that a monumental ruling not far from its fiftieth birthday could actually be overturned. But on June 24th, the Supreme Court made a ruling that prompted simultaneous celebration and outrage across the country. Most of you reading this will probably think that the decision was a good thing, perhaps even an encouraging sign that America can turn around and head in a good direction after all.

I fear, though, that not many are taking the time to think about this decision in a nuanced way. And I’m not sure that celebration is the right response for Christians. When I first saw the headlines last week, I was shocked but couldn’t feel excited. Most of you are probably scratching your heads, but bear with me.

What the ruling means—and doesn’t mean

It’s important that we be able to converse intelligently about what actually happened with the ruling. It’s easy to misunderstand both the ruling itself and the wider responsibility and purpose of the court. The court wasn’t attempting to make a ruling on abortion itself. Rather, the court was reviewing a specific question: does the Constitution guarantee a right to abortion? In 1973, in the Roe v. Wade case, the court ruled that a pregnant woman has a right to an abortion, protected by the Constitution. In last week’s ruling, the court argued that the logic in Roe was constitutionally questionable. The court at the time, they argue, attempted to settle an issue of much controversy by making far-fetched claims about how the Constitution related to abortion. So the recent ruling wasn’t about the sanctity of life, nor did it attempt to make any judgment calls on the ethics of abortion. Justice Alito, for the majority, said the following:

Abortion presents a profound moral issue on which Americans hold sharply conflicting views. Some believe fervently that a human person comes into being at conception and that abortion ends an innocent life. Others feel just as strongly that any regulation of abortion invades a woman’s right to control her own body and prevents women from achieving full equality. Still others in a third group think that abortion should be allowed under some but not all circumstances, and those within this group hold a variety of views about the particular restrictions that should be imposed.1

The American case was peculiar, since not only was abortion legal, but it was guarded as a constitutional right. Most European countries, for instance, have laws which allow abortion in at least some cases, but these have been passed by democratic legislatures. The US also stood out for how far along it allowed women to have abortions, being one of only seven countries permitting elective abortions after 20 weeks of pregnancy.2 In short, we’re a country of polarized extremes on the issue.

So while it’s true that it took conservative justices to bring the ruling about, their argument is legal, not moral. Now that there is no longer this constitutional protection, it falls back on the states to legislate as they see fit. There are several states that are likely to introduce legislation that would ban abortion, or at least restrict it. It’s inaccurate to say that this ruling bans abortion, but it is almost certain that some states will take that step.

A brief word about abortion

From a biblical perspective, abortion is a despicable evil. Over 85% of abortions in America come from unmarried women.3 In most cases, this means the woman has willingly engaged in immoral activity. (If you’re wondering, less than 2% of all abortions are for pregancies from rape or incest.)4 When someone affirms a woman’s right to choose, they are saying in effect that a woman has a right to engage freely in sexual activity—and irresponsibly, at that—with no consideration for the child she could conceive. Of course there is debate over when a fetus should be considered a human being. The ethical dilemmas for the pro-choice position are many. Does the simple expelling of a baby from the womb create life that wasn’t valid a moment before? Or does something magical happen at the twenty week marker? By far the simple—and only logical—argument is simply that life begins at conception. When most women get an abortion, they have violated God’s law by fornicating—and then they commit murder.

The problem, though, is that we can’t talk about abortion isolated from the view of sexual morality that surrounds it. We can’t expect those who live a promiscuous lifestyle to be swayed by our pro-life arguments, outside of an appeal to their conscience and a hope that God will enlighten their hearts. We can’t hope for the “need” for abortions to diminish unless people abandon their lifestyles.

Actually, that last statement isn’t quite true. Abortions have gone down significantly in the US over the last few decades, going from well over a million a year in the eighties and most of the nineties—peaking at 1.4 million in 1990—to just over 600,000 a year in recent years.5 While there are numerous factors at play, the most significant is probably increased sex education and access to contraceptives. If you think about it, no one actually wants an abortion, at least if there are more convenient ways to prevent a pregnancy. Many Christians balk at the idea of contraceptives being considered a part of basic healthcare. Why should taxpayer dollars subsidize immorality, right? The problem, especially in poor areas, is that when contraceptives are inaccessible, women are more likely to get pregnant and want an abortion. In fact, policies under Democratic administrations seem to cut down abortions more than under Republicans—who are of course more likely to be pro-life. There’s debate about it, but it’s worth checking out.6

My point is hardly that I think Christians should help hand out contraceptives so people can have extra-marital sex without needing an abortion. But I want us to grasp the complexity of the issue. We can’t talk about abortion without being aware of the sexual lifestyle surrounding it. And while we rejoice whenever we see others—including non-Christians—limiting their sexuality to marriage between one man and one woman, we are most certainly not going to enforce biblical morality outside of the church.

In short, whenever biblical morality isn’t followed, there are no easy ways to try to halfway make things more moral. We face tradeoffs, like choosing between making illicit sex easier and safer or making it riskier and more likely to lead to abortion. We should shake our heads at the brokenness of the world and cry out for redemption.

So how should we feel?

I happen to believe that the Supreme Court made the right decision. This is largely because I agree with the court’s legal reasoning, which reflects the purpose of the court to interpret law, not to be judicial activists. This isn’t because I’m pro-life. So I’m certainly not upset or disappointed with the decision. But America is still broken and plagued with immorality. In fact, I fear the decision only increases the already ugly level of polarization in our nation. Many people are very upset right now, more likely to engage in activism to reverse the decision—and promote other liberal ideologies—and more likely to show up at the polls. And I trust we feel no glee when we think of those who may find themselves wanting an abortion and no longer having recourse. Where abortion doesn’t happen and lives are saved, we rejoice. But this is no time to talk about “dumb liberals” or “baby killers.” If a woman choose not to have an abortion, what happens to her and her child? She is most likely to be unmarried, perhaps no longer with the man who gave her the child, and likely to be poor. If drugs and alcohol were involved, the baby will find the world against it from the start, with crippling psychological and developmental problems. Simply the absence of a father is a significant setback.

Compared to the roughly 600,000 abortions a year, infant adoptions are a mere fraction of that—around 18,000. If adoptions would come even close to replacing abortions, the number of parents willing to adopt would need to go up exponentially. Is it fair to cheer restrictions on abortions without being willing to invest in the chaos that’s left? Not nearly everyone can adopt, of course. But for those willing, it’s an incredible commitment, and something that actually helps. It’s easy to complacently say something like “thanks to Trump’s court picks, life is protected” while raising large, biological families. But this contributes nothing to the crisis.

The wages of sin are not cheap. There are no easy answers for the problems facing our nation. We know the ultimate answer lies in lives transformed by the gospel. As the church, it’s our responsibility to bear witness to its beauty and power. Excitement over temporal decisions that we know stoke sectarian fires can blur this. I think it would go a long way for the church’s witness if the world would see us sad, recognizing the consequences of sin, deeply unsatisfied by any court ruling that happens to line up with our beliefs. America needs the gospel—and much healing. And we need God’s help to compassionately point to a better way, outside of the predictable, polarized political fray.

22 thoughts on “Should Christians Be Excited About the Overturn of Roe V. Wade?”