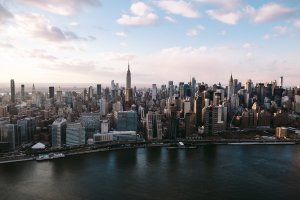 Over eight million people live in my hometown. Many call it the Big Apple, a financial hub, an artist’s inspiration, a tourist’s destination. I call it home. When I think about New York City, I don’t picture the Brooklyn Bridge, the World Trade Center, or yellow cabs. My mind flashes to 52nd Ave, to the block where I have lived for over nine years. I don’t think about Lady Liberty—I think about the old Indian lady who lives down the block from me, always dressed in a white sari and a big smile. We’ve had multiple conversations even though we don’t speak a word of each other’s language. My memories about the city only contain one or two references to famous landmarks; instead, my neighbors, coworkers, and fellow church and family members fill my mind with their faces. I live in New York City because daily I have dozens of opportunities to share Jesus as I see dozens of people every single day.

One million buildings. 8.4 million people. Five boroughs. Dozens of famous buildings and landmarks. But while these all comprise my home, New York City is only one of thousands of cities around the world. Currently about half of the world’s population lives in a city. The University of Michigan projects that by 2050 that number will rise to almost 70%. But quoting statistics, as interesting as they may be, doesn’t impact me like my neighbors do.

For the last year and a half, I daily walked seven minutes to my restaurant job. Along the way, I would sometimes chat with Ms. Gloria, a Hispanic mom with two kids who lived on the corner of 54th. I always saw a group of Chinese ladies doing their daily exercises in the park a block from the mall. Even a few months after Covid hit, they were faithfully there, stretching their limbs while maintaining six feet of space. Most of my coworkers have been born and raised in New York. Through that interaction, I learned a lot about city culture that I had not known before (did you know that you say someone is standing “on-line,” not “in-line”?). But some of my favorite parts of the day were coming home and seeing my mom or dad with neighbors in our backyard and alley. Summer evenings are the best time for that—grilling in the backyard and sharing food and conversations. Our neighbors from Pakistan, Bangladesh, Mexico, and China always bring the best food. The shrimp, tofu, and halal chicken that they put on the grill sure beats our hotdogs.

It’s easy to go to a city near you for a monthly outreach and pass out some tracts. That can be a profitable time to share the gospel as well. However, normal-life interactions with unbelievers powerfully connect the words on a tract with the routine, Christ-like actions of your life. Your neighbors see the love of Christ reflected in you, and it gives you time to talk and discuss the gospel. Sharing the gospel happens best in natural, organic ways-in daily routines. Bible studies and conversations about Jesus will often be better received when they come from a friend, and not a stranger. We do need to share the gospel with strangers as well. But what happens when someone you meet on your church outreach to the city wants to have Bible studies? Living where they live allows you to connect them immediately with a church for further discipleship.

In our Anabaptist communities, most people move to cities to better reach people. It follows logically that you can reach more people with the gospel if there are more people around you. But cities foster a culture where it is hard to make friends. Despite the fact that people are surrounded by hundreds of fellow humans, many are incredibly lonely. Walk the streets of New York and you see people going about their day with their heads down, either looking at their phones or on the next step in front of them. A smile sent their way will only cause a brief smile or look of surprise. Genuine connections take time, which is why making our homes in cities is vital.

God created us to reflect His glory. By definition, that means we show (reflect) His truth to other people. And the more people see our daily actions that point to a bigger Somebody, the more God is glorified. When Jesus was traveling around Israel, He went to the people, preaching in synagogues, their towns, until the crowds forced him into bigger areas. The apostles later followed His example, traveling around to the different cities in the Roman Empire. Antioch was a major hub of the day, and it was where Christianity exploded and spread to other cities. No verse in Scripture says “Go to the cities” but it does say “Go and make disciples.” By surrounding ourselves with unbelievers, we are able to most effectively carry out Jesus’ final command.

But what about being separate?

One objection to moving to the city comes from the fear of living in a place where you are surrounded by ungodliness. Aren’t we called to “come out from among them and be separate?” I have to admit that I have seen much evil and brokenness in my neighborhood-Hindu and Buddhist temples and Muslim mosques are everywhere, the language of my coworkers is on a R-rated level sometimes, and there is a brothel literally right beside our church building. But I ask you this. If all Christians literally “came out from among them” and physically moved away from this sin, who would be left to share and emulate the good news? Who would talk with our upstairs Muslim neighbors from Bangladesh? Who would invite my bisexual, New Age coworker for supper?

George MacDonald, in the poem, “The Call of the City,” wrote these lines: “I said, ‘But the sky is black,/ There is nothing but noise and din;’ / But He wept as He sent me back, ‘There is more,’ / He said, ‘there is sin.’” Yes, the city is full of evil, but we as Christians are sent to the darkness. The places with the gospel have little use for more light because they are already illuminated. It is the darkness that needs a light to guide them.

Many people don’t want to raise their children in a setting where they will have ungodly influence. However, living in a city often makes the difference between good and evil more stark and more noticeable to children. My little sister has grown up with Muslim, atheist, Hindu, and Catholic friends, and she realizes it. Once, when she was seven, she argued with a Hindu neighbor about the power of Jesus over idols. Although we were homeschooled, conversations still arose at the supper table about the beliefs of other religions-as children, evangelism touched on a personal level when we realized the majority of our friends weren’t going to heaven when they die.

One activity for Ministry Training Center students is talking to people about their religious background. One of the questions is, “Do you know or have you heard about Jesus?” Multiple times, the response was “No.”

There are people living in the biggest city in the United States who have never heard about Jesus Christ.

This fact alone should propel more Christians toward cities. Most of rural America has already heard the gospel at least once in their lives, yet cities in America alone hold a unique opportunity-immigrants from dozens of countries and unreached people groups. Church, may we go to those who have had little opportunity to hear the gospel! May we live among them and dialogue about our beliefs, sharing apartment buildings and backyard barbeques!

3 thoughts on “Why I Call New York City Home”