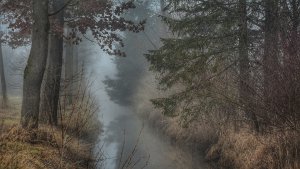 For many of us, the problem of suffering is not an abstract, theoretical question. It’s all too real. How can it be true that God loves us, or that the Bible’s promises are true, or that there is any actual “hope,” in the middle of intense suffering or tragedy?

The problem of suffering became very personal for me and my folks a few years ago when my youngest sister, Faith (then age 16), began a rapid health decline that left her unable to travel, read, have any social life, or do pretty much anything besides sleep (a lot), rest (a lot), eat an extremely restricted diet, and sit on a chair. There were two traumatic hospitalizations, both following extreme low points where her life was a living hell and she almost died.

On top of that, my mother’s health has never been good, and it has declined in the last few years (probably related to all of the stress surrounding Faith’s illness).

Faith’s condition remains basically the same still today, a few years later (though she is able to do a bit of reading now again). Her life will most likely never be the same, and the “good old days” of our family life are increasingly distant memories.

Some of you face similar or even worse situations. How do we cope with them, not merely at a theoretical level but also at an emotional and personal level? There are four pillars that have helped me and my folks in the past few years.

1. We Live in a Fallen World

While the truth that we live in a fallen world is not immediately comforting in the middle of suffering, it is a crucial foundational conviction that must be in place in order to deal well with tragedy. This is not the world as God intended it to be. The effects of the sin of Adam and his descendants have affected every aspect of reality. The natural world is broken. We as humans are broken—physically, psychologically, socially, spiritually. While suffering is still always tragic, we should not be too surprised when we who live in such a world groan with the effects of its brokenness in our own lives.

But the fact that the world is fallen does not lead to despair, for with that knowledge also comes the promise that creation’s fallenness is temporary—that creation will be redeemed.

2. The Bible Is Realistic about Suffering

Christians can be frustratingly unrealistic about suffering. Some seem to think it’s unspiritual for suffering to deeply affect and even to shatter us. So they’ll glibly cite Romans 8:28 (“All things work together for good”) or let out a trite “In everything give thanks” in response to someone’s suffering. We can sometimes get the impression that we have to live above pain and grief: Smile, say it really doesn’t matter, and move on!

If the Bible treated suffering that unrealistically, I’m not sure that I would still be a Christian.

In some of the darkest days when I was watching my little sister’s health dramatically decline, the most comforting words I could find were not direct encouragements. They were laments. The book of Job, with its 42 chapters, records the grief and confusion and aching and disorientation of a man who had lost everything under God’s sovereign hand. One preacher has so rightly observed that the book of Job cannot be summarized or abbreviated. The entire process is needed. Psalm 88 became one of my favorite psalms because the author pours out his disillusionment and grief to God in a raw, heartfelt way—and he doesn’t conclude it with a happy ending.

Nor is this phenomenon limited to the Old Testament. Consider Jesus, who wept openly at the tomb of Lazarus when confronted with the grief of living in a broken world and who was overcome with horror and sorrow at Gethsemane. Or consider the apostle Paul and Timothy, who at one point “were so utterly burdened beyond our strength that we despaired of life itself” (2 Cor 1:8 ESV).

This is what Paul writes about in Romans 8:19–24, when he speaks of creation as being in “bondage to corruption” and “groaning” as it awaits our resurrection. We too, as believers, do and should “groan inwardly” as we suffer and await our future hope of restoration. It is true that “all things work together for good” (v. 28), but that is within the context of our groaning and suffering. And it is in the context of our future hope—until which we may never see the “good” that God is working in our suffering.

3. We Have the Hope of New Creation

But there is a future hope. And it is the hope not of an escape from the world and from our bodies to some sort of ethereal existence in “heaven,” but of the earth’s restoration and of our resurrection.

The hope of new creation has become so much more real and central to us since illness has overtaken our family. What our family and my dear sister have lost—family picnics and trips, dinners together, Faith having a social life with other young people and a bright future ahead of her—are not truly lost. A day is coming when Jesus, the second Adam, will return to restore creation and raise us from death and decay. And we will all live on earth, as humans, together, again.

For a long time, it was very difficult for me to enjoy anything or to appreciate the beauty of nature. It just seemed so wrong given Faith’s inability to enjoy much of anything. But instead, in the beauty that still haunts our broken world we are meant to see the hope of future restoration. Someday my sister will experience the beauty of an unbroken earth with the light of God’s glory shining down on her strong, invigorated body—with her family and friends once again.

This hope does not remove the deep grief and pain of loss that we feel constantly. It doesn’t at all. But it does give a real, tangible hope that the loss is not final. It will be reversed, even beautified (2 Cor 4:17); we must simply wait and hope (Rom 8:23–25).

4. Jesus’ Death Means that God Does Love Us

Finally, there is one more utterly crucial piece that I needed to hold on to in the bleakest days of our family’s suffering. I remember, as Faith was declining, thinking and wondering and praying: “God, you could heal her; why don’t you? In what sense is it true that you love Faith, or our family?” The answer was not immediately apparent.

But there was one fact that I found inescapable: the crucifixion of Jesus, for us. All I could say was, “God, I have no idea why you’re allowing this. But there is one thing I do know: It’s not because you don’t love us. The cross proves that beyond doubt.” This is what Paul says in Romans 8:32–37. We can have confidence that the God “who did not spare his own Son but gave him up for us all” is and will always be for us—even “in” all of our suffering.

We must never forget that we live in a broken world, ravaged by sin. This means that suffering is no surprise, though it is always tragic. As we grieve our losses and our suffering we can take encouragement in the fact that God is not flippant about our tragedies; he has inspired long laments and poems with no happy endings to be part of the Bible. But we can also hope in the fact that everything sad will someday “come untrue,” that God himself will wipe the tears from our eyes when he comes to restore our world and live with us in it. And in the meantime, we can hold onto the one piece of evidence that still glows even in our darkest nights—God gave his own Son to suffer and die for us. So whatever the reasons are that he allows horrible suffering into our lives or the lives of those we love, it’s not because he doesn’t love us. That we know.